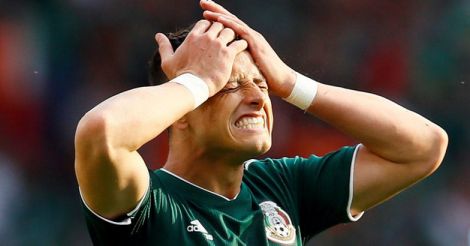 Mexico coach Juan Carlos Osorio was apologetic, his players were defiant and their critics baffled after they reached the last 16 of the World Cup despite a 3-0 defeat to Sweden.

One former Mexico coach, Ricardo La Volpe, suggested that the players were already feeling the weight of the so-called "fifth match" -- the elusive quarter-final -- as they fell apart against the physical Europeans.

After silencing Osorio's critics with impressive wins over Germany and South Korea, Mexico nearly blew it against Sweden and only progressed because of Germany's incredible defeat to South Korea.

Even so, they finished second in the group and will have to face Brazil next, making them odds-on to go out in the round of 16 for an incredible seventh time in a row.

Proceeding to the last eight or beyond has become a Sisyphean task for the Mexicans since they last reached the quarter-finals when they hosted the competition in 1986.

La Volpe, whose team were eliminated by Argentina in 2006, said it might be all in the mind.

"I think the problem is the famous fifth match," he said, adding that Mexico felt more comfortable as underdogs.

"It's a psychological thing and the players still don't know how the play with the burden of being winners."

He then suggested that Mexico might be happier facing Brazil than Switzerland, who they would have met if they had won the group. "Mexico know how to play against the big powers," he said.

"My colleagues tell me that Osorio is very studious but he didn't study Sweden so well, because if he had, we would have imposed our style and kept the ball on the ground," he said.

"Those mediocre people who have never achieved anything in life will say that it's a miracle that we got through, but what we have achieved is important," he wrote on his Instagram page.

"The first mission has been accomplished and now we have to work hard and continue improving for the next one."

Forward Marco Fabian asked fans to "give credit and value the other two matches."

"We are happy and thinking about what comes next," he said. "Now that we are in the last sixteen, anything can happen."

Osorio, who had been pilloried by the media in the run-up to the tournament before turning things around with the win over Germany, admitted he had picked the wrong formation against Sweden and had tried to be too much of a purist.

Speaking before he knew that Brazil would be their next opponents, he said: "There is no time to cry over spilt milk, we will have another look at the match and make adjustments. We haven't got much time to analyse our next opponents who will certainly be very different to Sweden."