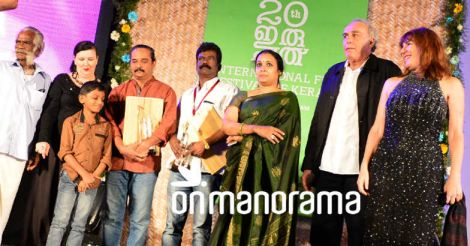 Ottal directed by Jayaraj, fourth from left, was adjudged the best film at the IFFK. Rinku Raj Mattancheriyil

The movie made history, becoming the first ever Malayalam movie to have swept all the top awards, including the 'audience poll' prize for best film, in the history of the 20-year-old film festival.

Kerala Governor P. Sathasivam awarded the Suvarna Chakoram, the Best Film of the International Federation of Film Critics (FIPRESCI) jury, the Best Malayalam film of the Network for the Promotion of Asian Cinema (NETPAC) jury and the audience poll awards to Jayaraj at the event held at Nishagandhi auditorium here on Friday.

The Suvarna Chakoram consists of a Rs 15 lakh cash award, certificate and memento. 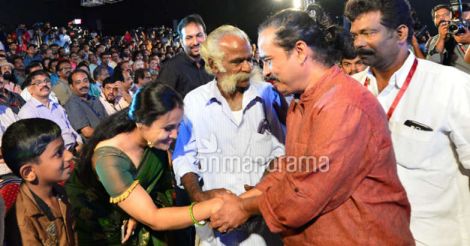 Jayaraj congratulated by his wife Sabitha (also an actor in 'Ottaal') as the filmmaker, actors Ashanth K. Sha, Kumarakom Vasudevan and producer K. Mohan go onto the stage to collect their awards. Photo: Rinku Raj Mattancheriyil

The Lifetime Achievement award was conferred on Iranian film-maker Dariush Mehruji by the Governor. The award carries a cash prize of Rs 10 lakh, a memento and an official citation.

The Film Employees Federation of Kerala’s (FEFKA) 'Masters Award' was given to veteran filmmaker K.G. George at the event. It was Mehrjui who presented the award to George. The Iranian director also presented the prize to the signature film winner Shameer Babu.

Kumarakom Vasudevan and Ashanth K. Sha, the lead actors of Ottaal also earned a special mention for their performance.

The citation stated that Ottaal, already a winner in the National and State film awards, took the top prize for 'its strong cinematic language, interweaving local and planetary concerns; humankind’s relationship to nature and nurture and child human right—all grounded in a deep honest connection to culture and place'.

After the closing ceremony, Ottaal was screened at the Nishagandhi auditorium and Tagore theatre.

Delivering his key note, Governor Sathasivam said, "It is often felt that Kerala is not only God's Own Country, but the favourite foster land of a variety of arts, so it is little wonder that it has produced notable names in filmmaking."

Speaking at the event, Kerala Cinema Minister Thiruvanchoor Radhakrishnan said that the relationship that the delegates share with the IFFK that made the festival a success.

"When the festival reaches its 25th year, we hope to accommodate 25,000 delegates. We have already had a discussion with key players in the film industry to discuss the better marketing of Malayalam films," said the minister.

"We have to make a better effort to market Malayalam films internationally. The government should also implement the recommendations of the Adoor Gopalakrishnan Committee report," said Opposition Leader V.S. Achuthanandan at the ceremony.

Manorama Online won the award for Best Online reporting of the film festival.

Tagore theatre, which was introduced this year as the festival's main hub, won the best theatre award for its aesthetic quality, while New Theatre Screen 1 won for best technical quality.

Fourteen films representing 11 countries, including four from India, were in the race for the top honours. Two Malayalam films were there in the competition segment - Ottaal by Jayaraj and 'The Painted House' (Chaayam Poosiya Veedu) by Thiruvananthapuram-based brothers Satish and Santosh Babusenanan.

The other Indian entries for the competition were Hindi film 'The Violin Player' by Bauddhayan Mukherjee and Bengali film 'No Woman's Land' (Rajkahini) by Srijit Mukherji.