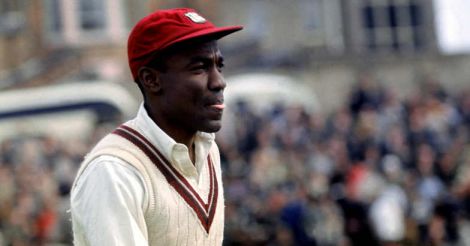 Conrad Hunte is regarded as one of the greatest West Indian openers. File photo: Getty Images

As international cricket returns to Thiruvananthapuram after a gap of twenty-nine years, memories of an extraordinary shot still remain vivid in my mind.

It was an exhibition tie between the South Indian XI and the visiting West Indies side in 1965. Legendary Gary Sobers was the captain of the West Indies, but he did not play that game.

Conrad Hunte, one of the greatest West Indian openers, hit the second ball of the match for a huge six. The ball sailed over the gallery at the University Stadium and landed in front of the Mascot Hotel on the other side of the road. As it could not be recovered, a new ball was taken to continue the match.

The result sprang no surprises as the mighty West Indians defeated the South Indian XI, led by spin wizard S. Venkataraghavan, with ease.

I was in Class VI then. I went to watch the match with my friends. The ticket was priced at Rs 1.

On a downward spiral

I believe the unique weather patterns, especially the monsoon, have had an adverse impact on Kerala’s cricketing ambitions.

The match between India and Australia at the University Stadium in 1984, the first international tie hosted by the state, was abandoned after heavy showers lashed the city.

Four years later, the city played host to another high-profile match, between India and West Indies, and it remained hitherto the last full match held in the capital city. Eventually, the city’s passion for the game diminished and the venue completely faded out of the picture.

All those matches were played on matting pitches made of woven coconut mats fixed to the ground with iron nails. Today we can’t imagine playing an international match on such a surface. Obviously, what hampered the growth of cricket in the state was the lack of turf wickets.

Kochi became the hub of cricketing activities in the state after the Greater Cochin Development Authority built a three-tiered cricket stadium of international standards in the city. As a result, the University Stadium in Thiruvananthapuram was turned into a venue for holding athletics competitions.

Now, things have started changing for the better. The Sports Hub in Kariavattom is one of the best stadiums in the country and the most advanced too. As Thiruvananthapuram is all set to host another international match after a long gap, it will mark the resurrection of the city's rich cricket legacy.

I’m certain that these positive changes will inspire more and more local players to don India colors. I will also be there to witness the match, wearing the same passion and fervor of that Class VI student on my sleeve, and looking forward to watch some huge sixes like the ones hit by Sir Conrad Hunte!

(The author is a noted filmmaker)

The duo has been giving major couple goals ever since the two tied the knot in Italy in 2017.