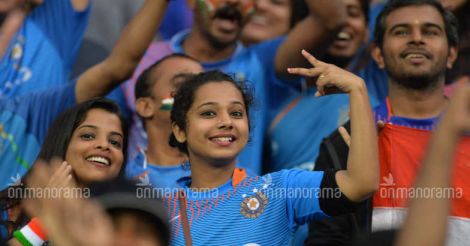 Indian fans cheer their team on during the third T201 against New Zealand in Thiruvananthapuram on Tuesday. Rinku Raj Mattancheriyil

Thiruvananthapuram: India captain Virat Kohli said the bowler-friendly conditions made them "nervous" after losing the toss before prevailing against New Zealand in the series-deciding third Twenty20 International here Tuesday night.

India beat New Zealand by six runs in the rain-curtailed match to claim the series 2-1. India had beaten the Kiwis in ODIs with the same scoreline.

"I think we were really happy to get a game. This crowd deserved to watch some action. We were nervous to start here, with the damp pitch," said Kohli after India won the eight-overs-a-side contest.

India made 67 for five and in response Kiwis could only reach 61 for six in eight overs.

Jasprit Bumrah starred with the ball, striking twice and bowling the all important penultimate over of the game. He ended with figures of two for nine in two overs. "We thought if we can take the run-rate up, it's not going to be so easy. Rohit (Sharma) and M S (Dhoni) came up with Bumrah bowling the second last, and Hardik Pandya bowled the last over well.

"We have won a few on the trot and it makes us very proud. This stadium is beautiful, the outfield wonderful and the crowd made it special. I am surprised there were no games here earlier," he added. 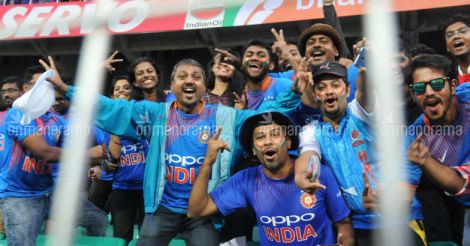 Indian fans cheer their team on during the third T201 against New Zealand in Thiruvananthapuram on Tuesday. Rinku Raj Mattancheriyil

The Greenfield Stadium hosted its first ever international match.

New Zealand captain Kane Williamson said India showed they are one of the best teams in the world by winning the pressure games regularly.

"It was a tricky surface and runs on board on that surface was handy. It came down to the couple of deliveries. Shame to not get across the line in this decider. As soon as you ran your fingers on the ball, it made life difficult," said Williamson.

"In this part of the world, wickets can be flat. We showed good fight. You have to be on top of their game to win here, they are one of the best teams in the world. I think there have been number of strides forward for us. Fairly new group and it's not easy, guys coming here for the first or second time. It's a tough place to play," he added.

The duo has been giving major couple goals ever since the two tied the knot in Italy in 2017.