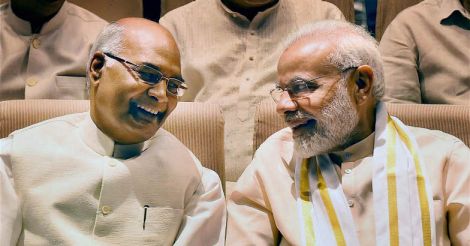 New Delhi: Election for the next president of India will be held on Monday where NDA candidate Ram Nath Kovind is pitted against opposition nominee Meira Kumar.

The counting of votes will take place on July 20 in New Delhi where all the ballot boxes will be brought from various state capitals.

The electorate, comprising elected Lok Sabha and Rajya Sabha members and members of state assemblies, is tilted in favor of the NDA, but the opposition is still working to seek support of some regional parties in favor of their candidate.

Both Kovind, a former Bihar Governor, and Kumar, the former Lok Sabha Speaker, have held a series of meetings across states to garner support for their candidature.

The tenure of incumbent Pranab Mukherjee comes to an end on July 24. So far 13 stalwarts, including Mukherjee, have held the post.

The electoral college which elects the president through the system of proportional representation, comprises MPs and members of state legislative assemblies.

A total of 4896 voters - 4120 MLAs and 776 elected MPs - are eligible to cast their ballot. MLCs of states with legislative council are not part of the electoral college.

Since the election is through a secret ballot, the parties cannot issue a whip to their members to vote for a particular candidate.

A total of 13 vacancies in Lok Sabha and state assemblies will be filled up after the presidential elections.

But the promised support from the BJD, the TRS and the YSR Congress and likely backing from the AIADMK factions could offset the shortfall of the presidential votes by a substantial margin.

In the 2012 elections, Pranab Mukherjee garnered 7,13,763 votes, while Pratibha Patil secured 6,38,116 votes in the previous polls in 2007. Both Mukherjee and Patil were Congress nominees.

A total of 32 polling stations -- one in Parliament House and one each in the state legislative assemblies, have been set up.

33 observers have been appointed by the EC to oversee the conduct of election. While two observers will be present in the Parliament House, one each will be deployed in the respective state assemblies.

In a fresh development, the Election Commission has barred MPs and MLAs who vote to elect the next President tomorrow from carrying their personal pens inside the voting chamber and will have to mark their ballot with specially- designed marker pens.