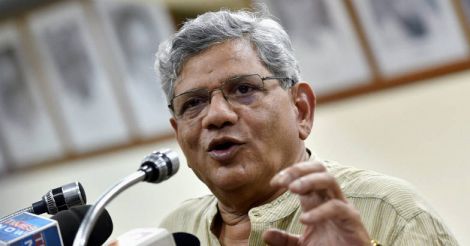 Briefing reporters about the deliberations of the CPM central committee meeting, Yechuri said that the party would discuss with other Opposition parties on fielding a common candidate for the president's post.

The party would organize agitations against the anti-people and communal policies of the Bharatiya Janata Party (BJP). A series of mass agitations have been planned from the second week of May against the financial hardships being imposed by the Center on the people.

The CPM would also raise issues like the cut in ration to the State, destabilization of the Mahatma Gandhi National Rural Employment Guarantee Scheme, privatization of public sector undertakings and the failure of the Center in providing fair price for agriculture produce.

The CPM would unite the Opposition parties against the government's manipulation in norms to enable political parties to take donations from industrial and corporate houses.

The CPM would organize a convention of secular parties and organizations against communalism before the start of the monsoon session of Parliament.

The stance adopted by prime minister Narendra Modi would lead to further communal polarization in the country. The party would organize a one-day national agitation against the delay in passing the Women's Reservation Bill, Yechury said.