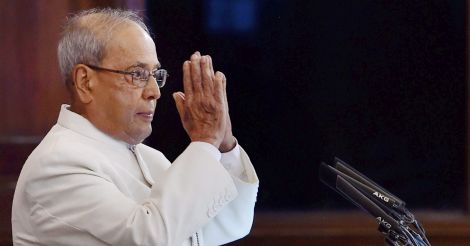 President Pranab Mukherjee gestures after his speech during his farewell ceremony in the Central Hall of Parliament in New Delhi on Sunday. PTI

New Delhi: Members of Parliament on Sunday bid adieu to outgoing president Pranab Mukherjee at a gala ceremony in the Central Hall of Parliament as leaders recalled his contribution in upholding democratic values.

In her speech, Mahajan said, "This is a solemn occasion for each one of us to express our profound respect to president Mukherjee."

Ansari lauded Mukherjee for his "unshakable belief in the idea of India" and said he often appealed to the people to re-dedicate themselves to the democratic values of the country.

Mukherjee also stressed upon pluralism and diversity "as the greatest strength" of the country, he said.

Ansari complimented Mukherjee for the manner in which he essayed the role of the president.

"He brought great distinction and dignity to the top office. His views on national and international issues have enhanced the stature of the office," he said.

The outgoing president expressed gratitude to the parliamentarians for the farewell.

"After Independence, we undertook to promote fraternity, dignity and unity of the nation. These ideals became the lodestar for the country," Mukherjee said.

He asked the members to avoid frequent disruptions in parliament saying it hurt the opposition more.

"During my years in parliament, I learnt that it stands for debate, discussion and dissent. I also learnt that disruptions hurt the opposition more," he said.

Mukherjee said the government should avoid the ordinance route as it should be reserved only for compelling circumstances.

"It should not be taken for matters being considered for discussion (in Parliament)," he added.

Mukherjee said, "As the president, I have tried to protect, preserve and defend the Constitution, not just in letter, but in spirit as well."

He concluded by saying, "I leave this magnificent building with a rainbow of memories and a sense of fulfillment and happiness of having served the people of this country as their humble servant."

Mukherjee remembered his "mentor", former Prime Minister Indira Gandhi as a "towering personality" in his last speech as the President of India.

"My career was mentored by Mrs Indira Gandhi who was a towering personality. She had the courage to call a spade a spade," Mukherjee said as he related an interesting incident that happened in London after the Congress' defeat post Emergency.

"After the Congress' and her own defeat post Emergency, she went to London in 1978. A battery of mediapersons, in a fairly aggressive mood were waiting to ask questions.

"The first question was: ‘What had been your gains from Emergency?'. Looking directly into the eyes of mediapersons, in a level voice she replied: ‘In those 21 months we comprehensively managed to alienate all sections of people'," Mukherjee recalled.

After a few seconds of silence, there was laughter, he said.

"Nobody after that asked a question about Emergency and the mediapersons melted away," he said.