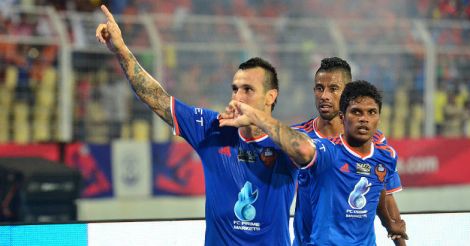 Panjim: FC Goa, coached by former Brazilian great Zico, outplayed Roberto Carlos' Delhi Dynamos in a 3-0 home win on Tuesday, to overturn a first-leg deficit and book their place in the final of the Indian Super League (ISL).

Goa had finished top of the standings in the second season of the eight-team competition, having won both of their league matches against Carlos' Delhi, but suffered a 1-0 defeat in the semifinal first leg on Friday.

Zico's men, however, appeared determined from the start to avoid a repeat of last year's disappointment when they lost in the semifinals to eventual champions Atletico de Kolkata on penalties.

Spaniard Joffre picked the ball up on the right flank, dribbled past John Arne Riise and beat Delhi goalkeeper Antonio Doblas at his near post with a low shot to open the scoring and make it 1-1 on aggregate in the 11th minute.

Rafael Coelho made it 2-0 in the 27th minute with a powerful right-footed strike that went in off the inside of the far post.

Delhi tried hard to find a way back into the match. Their keeper Doblas made a couple of good saves to keep his team's hopes alive, but a goal from Dudu in the 84th minute ended their resistance.

Romeo Fernandes found Dudu in the six-yard box with a fine cut back and the Nigerian striker made it 3-0 to spark wild celebrations in the crowd and from coach Zico.

Goa will meet the winner of the second semifinal between champions ATK and Marco Materazzi's Chennaiyin FC, who will take a 3-0 advantage into their second leg on Wednesday, for a place in Sunday's final.