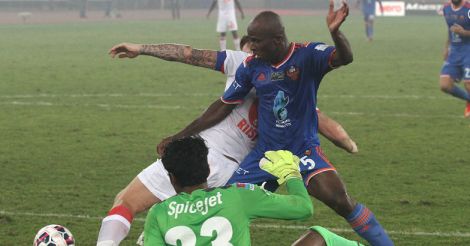 Panjim: Delhi Dynamos will have their task cut out when they lock horns with hosts FC Goa, who will be eager to overturn a 1-0 deficit in their return leg semifinal of the Indian Super League (ISL) here on Tuesday.

Seeking to make the final and play in front of their home crowd on December 20, FC Goa found the going tough in the first leg semifinal as they went down for the first time in five meetings against Dynamos. They will need to win on Tuesday by a 2-0 margin if they are to enter their maiden final.

FC Goa adopted a defensive approach and attacked on counters in their last match against Dynamos. The ploy did work as they created chances but failed to score until their opponent struck the only goal through Robin Singh in the first half after defender Raju Gaikwad got injured.

FC Goa coach Zico said, "It was a good match as both the teams played equally. We did well to soak the pressure until defender Raju Gaikwad got injured and they took the advantage and scored against us in the dying minutes of the first half, which ultimately remained the match winner.

"Just like them we too had chances to find the equaliser but our players failed to cash in. But tomorrow we need to remain more sharp in shooting if we are to win and qualify for the finals."

Dynamos, who are high on confidence after their solitary goal win, will be contend with even a draw. Both teams met each other thrice this season, with Dynamos winning the last game.

Dynamos' marquee manager-cum-player Roberto Carlos said he is happy to be here once again.

"The last time they (my players) came here they lost but now they have come here with an advantage of beating them at home in the first leg semi-finals and want to repeat the same over here. My teams always played attacking game and will not change the pattern as we need one goal to enter the finals."

The 2002 Brazilian World Cup-winner and Real Madrid legend added: "My players are all motivated and ready to take on Goan side and looking for entertaining contest. Our boys have learnt from their mistakes in their earlier two matches which we have played against them and were able to beat them in the last match.

"Our boys need to remain focussed and give their best tomorrow. With Gustavo Santos, Florent Malouda, Richard Gadze and Chicao, who all play attacking game, I am confident to win tomorrow," Carlos stated.