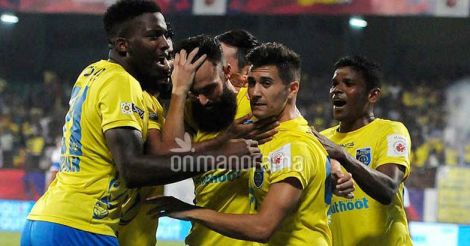 Pulga, (C) is congratulated by his team-mates on scoring Kerala Blasters' opening goal

Kerala Blasters lost all their energy somewhere during the ISL campaign and that was the reason for the team’s exit from this season’s ISL. Though Kerala Blasters formulated many plans this season, they were only able to execute it for only 10 minutes in match situations.

Professional football League these days is all about power. Teams which lack power will search for ways to bow out of the tournament.

The second minute goal scored by Kerala Blasters was beautiful one. One saw a desperate Kerala side seeking to hold on to their last chance in that goal. However, Kerala’s campaign ended soon after that goal.

If Kerala could create one magic moment, Goa created five magical moments. All Goans goals were beautifully executed ones. Kerala no longer had the intensity to win. Their lack of ideas was exposed and absence of a good striker who could convert half chances under any circumstances also stood out prominently.