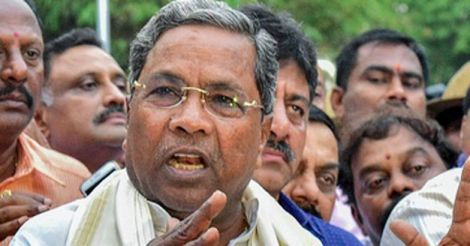 Bengaluru: Outgoing Chief Minister Siddaramaiah turned "emotional" at a meeting of the party's new legislators on Wednesday while speaking on Congress' defeat in the assembly polls even as senior leaders blamed him for the result, party sources said.

The 69-year-old leader received flak from several senior party MLAs, who held him responsible for the Congress' performance, citing his complete authority in selection of candidates and the Lingayat issue, they said.

Meanwhile, Home Minister in the outgoing government Ramalinga Reddy said most of the MLAs were present at the meeting except "three or four " who were on their way, but all were in touch".

Claiming that 117 MLAs were on their side, he said "despite this if the Governor does not invite us, we will decide how to go further...we may also parade our strength."

Party sources aware of the developments said Siddaramaiah "kind of got emotional" as he spoke during the legislature party meeting of the Congress' loss despite his government's "good developmental works".

Siddaramaiah is also said to have cited "polarisation" as one of the factors that affected the party's prospects in the May 12 election.

The sources said 73 legislators, including one independent MLA, were present at the meet.

Six MLAs who were absent, were in touch with party leaders over phone, they said.

A joint legislature party meeting of Congress and JD(S) MLAs is scheduled at a hotel here later, following which Congress leaders are likely to be shifted to a resort on the outskirts of the city, the sources said, adding that JD(S)was expected to make a similar move.

In the May 12 polls, BJP emerged as the single largest party with 104 members, while Congress secured 78, the JD(S) 37 and others three.

Alleging that BJP was trying to poach Congress MLAs, Reddy said "they had done it in the past, they are trying to do it again, but they will not succeed... we are all together and will stay together."

"BJP has contacted five or six of our MLAs. They raised their hands when asked during the meeting today," he added.

Reddy also said the Congress legislature party leader was not elected at the meeting, which discussed the government formation exercise. "We have signed a letter extending our support to Kumaraswamy as chief minister," he said.