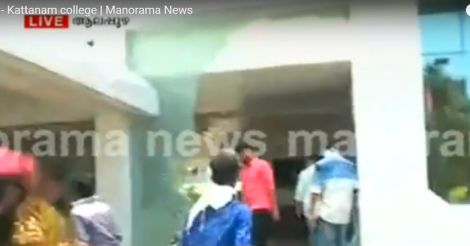 Kayamkulam: The protest march took out by Left-wing student activists at the Vellappally Natesan College of Engineering at Kattanam near here turned violent on Monday.

The SFI activists stormed the college compound and unleashed widespread devastation. They resorted to incessant stone throwing and smashed the glass panes and destroyed property inside classrooms.

The police force, which was comparatively small in number, stood mere spectators as they were not able to prevent the wild rampage of the agitators.

The activists were protesting the circumstances that led to the suicide attempt by Arsh, a student of the college, and the police action against activists who had earlier took out a march against it.

Meanwhile, action was taken against two police personnel for traveling in the vehicle of the prime accused in the case related to the suicide attempt and the college chairman, Subhash Vasu. The police were on their way to record statement in the case.