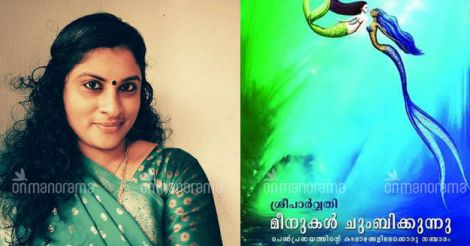 Ernakulam: The management of St. Teresa's College, Ernakulam, has refused to allow the release of 'Meenukal Chumbikkunnu,' a novel themed on lesbian love, at the college auditorium saying that the event may 'impact the minds of students.'

The college had initially allotted the auditorium for the release of author Sree Parvathy's novel at 3 pm on May 14.

Sree Parvathy told Onmanorama that the management expressed concern over the program's 'impact on the students' minds.

“We had booked the venue almost a week ago. We distributed our brochures and newsletters with details of the venue. We suddenly received a call from the principal today saying that the college is turning going back on their word in line with their stance on lesbian identity,” Sree Parvathy said. “They said 'such books' would influence the minds of their students and theirs is a women's college,” she added.

'Meenukal Chumbikkunnu' (The Fishes Kiss) is Sree Parvathy's first novel. The author was active in the literary circuit with her verse and short stories. 'Pranayappathi' is one of her acclaimed works. The organizers have managed to get another venue just across the main gate of St. Teresa's College. The book will be released on the same day at Children's Park Theater, opposite the college, they said.