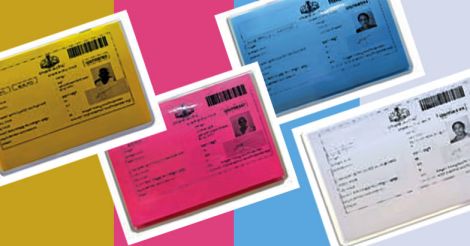 Alappuzha: The distribution of new color-coded ration cards will begin in the state Thursday. The income-based colour coding will eliminate the present above- and below-poverty-line cards now in use

To collect the new cards, you need to carry an identity card with a photo along with the existing ration card. The new cards can be collected from registered ration shops or special centers.

The cards are distributed from 9.30am to 5pm. On an average, at least five ration shops will handle the task in each taluk.

A fee of Rs50 is charged for priority cards (AAY) and 100 for general category. Scheduled tribe card-holders will not have any fee.

However, in Alappuzha, distribution will not start in Karthikapalli and Mavelikara taluks as cards are yet to arrive. Beneficiaries in Ambalapuzha, Kuttanad, Cherthala and Chengannur taluks will get cards from Thursday.

Chengannur taluk has 54,030 card-holders. Kuttanad taluk schedule starts Thursday and will go on until July 4. A total of 48,272 cards are to be handed over.

Distribution in Mavelikara taluk will start only on June 10. The taluk has 90,380 cards.

Prabhas himself took to social media to announce the release date.