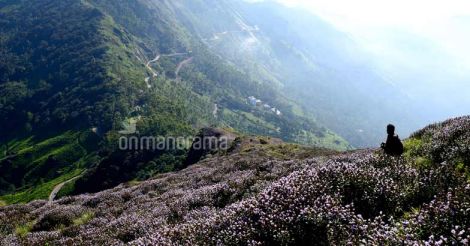 Thiruvananthapuram: Close on the heels of the Revenue Department’s action to cancel the ownership right of 20 acres of land allegedly encroached by Joice George MP and his family at the Neelakurinji reserve at Kottakambur village in Devikulam taluk, the state government has decided to demarcate the boundaries of the sanctuary announced during the reign of the V S Achuthanandan-led LDF ministry in 2006.

The decision was taken at a high-level meeting convened by chief minister Pinarayi Vijayan on Thursday.

The meeting also authorized additional chief secretary (revenue) P H Kurien to conduct a survey to identify the extent of habitations, institutions, and places of worship within the notified area, and submit proposals to the government to rework the boundaries of the area to be reserved for Neelakurinji by avoiding evictions and displacement of people.

As a first step, a ministerial-level panel headed by revenue minister E Chandrasekharan and forest minister K Raju, who also attended the meeting, would visit Munnar and look into the grievances of the inhabitants. Subsequently, a meeting of elected people's representatives would be convened.

The meeting also resolved to carry out verification of land records at Kottakkambur by a joint team of Revenue and Forest officials. Special consideration should be given to old settlers and tribal communities, the authorities concerned were instructed.

As per the official notification issued in 2006, the Neelakurinji sanctuary was proposed at an area of 3,200 hectares under Devikulam taluk.

The move to redraw the boundaries would result in shrinking of the notified area by at least 1,200 hectares, the additional chief secretary (revenue) said at the meeting.

The plan to establish the sanctuary was announced by the then forest minister Binoy Viswam on October 7, 2006, during the Neelakurinji festival in Munnar. The government issued the preliminary notification on October 26.

Of the 3,200 hectors of revenue land notified as sanctuary, around 1,200 hectares are currently owned by Joice George MP and his family as well as other small-scale holders.

The government has decided to conduct a detailed study of the area as there are legal hurdles to exclude these areas from the land notified for the sanctuary by categorizing them as human settlements and agricultural holdings.

A section of the local population has been alleging that the Forest Department acted in haste to fix the boundaries of the sanctuary, and as a result, a large extent of settled area was included in the land notified for the same.