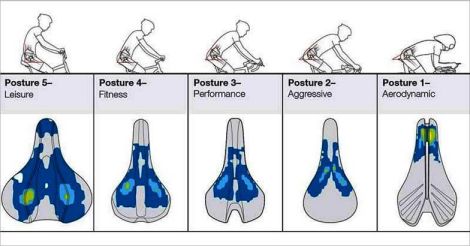 The answers to both questions are logical and scientific. Millions of people around the world ride bicycle every day and they all bend forward. If this posture was injury-prone, it would have changed by now. The fact that this is how people have been riding bicycles for centuries proves the correctness of it.

To apply power, one has to bend. Be it running, or boxing. One cannot run fast without bending and a boxer cannot land a power punch without bending.

In fact, bending prevents injury and also contributes to aerodynamics. A bent back acts as a spring and absorbs shocks better and air flows over the rider, making him/her faster. Cruise bicycles are for leisure riding during which riders do not put in too much of effort.

The same logic applies to sexual health. If it was true that bicycling causes ED, nobody in the world would be riding.

Bicycling, at least the amount of it most people do, does not cause sexual health problems. On the contrary, it is beneficial in multiple ways.

I personally know many riders whose sex lives improved after they began cycling.

One, however, must ensure that the bicycle is of proper size, the saddle height and position are correct and the posture perfect.

To choose the correct frame size, one should measure stand-over height. There should be a minimum one inch space between your scrotum and the top tube when standing over a bicycle. Less than an inch, the bike is big for you and more than three inches, it's small for you.

The position of the saddle should be ideally above the handle bar or at least on level with it. This is possible only if the frame size is correct. A bigger frame will require the saddle to be pushed down and vice versa.

The bicycle saddle should be parallel to the ground or slightly tilted down. This will avoid pressure on your scrotum and prevent numbness.

Challenging previous theories which contended that cycling may harm men's sexual health, a new study by University of California has found that cyclists have better erectile function than runners and swimmers.

Standing more than 20 per cent of the time while cycling significantly reduced the odds of genital numbness, but adjusting handlebar height lower than the saddle height did increase the likelihood of genital numbness and saddle sores, the researchers said.

“We believe the results will be encouraging for cyclists. Cycling provides tremendous cardiovascular benefits and is low impact on joints. We believe the health benefits enjoyed by cyclists who ride safely will far out weight health risks,” said Benjamin Breyer, professor at the University of California in San Francisco.

Eminent urologist Dhananjay Bokare said in Nagpur: “It's true that benefits of cycling far outweigh the risks but prolonged cycling is known to cause numbness and pain in the perineum area and also temporary ED. Most of these are reversible on cessation of cycling activity.

Proper posture, appropriate saddle height, saddle shape and handlebar height can help to take off some weight on the genital area.”

Sexologist Sanjay Deshpande had this to say about the University of California Study: “It’s only a news report based on an article published in Journal of Urology. According to present research evidence, cycling is similar to swimming and walking as regards to the sexual function of a man.

“The prevalence of ED in cyclists is nearly the same in a population and it may vary according to age and other disease status such as diabetes, hypertension or coronary artery disease. Cycling is cardio-protective while sparing the knees.”

(The author is a bicyclist by choice who uses the bicycle for everyday commute, distance riding and conducts professional workshops on bicycling and bicycles)