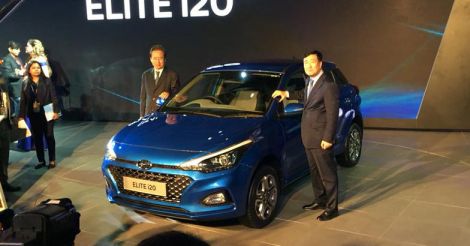 "The new 2018 Elite i20 is a product of our continuous R&D efforts ... the product is aesthetically designed with premium interiors and modern looks that make it truly appealing," HMIL MD and CEO YK Koo told reporters here.

The car comes with various safety features like dual airbags as standard feature.

The petrol version is powered by 1.2 litre engine while the diesel trims come with 1.4 litre powertrains.

The company also plans to launch an automatic (CVT) version of the petrol model later during the year.

The company has already announced its plans to invest over USD 1 billion (around Rs 6,300 crore) in India in the next three years on new products, development of powertrain and setting up of a new office building.

The company, plans to launch an electric vehicle next year and is also gearing up for the possible comeback of its popular model Santro around Diwali this year.

HMIL has lined up nine products to be introduced between 2018 and 2020.

The company, which is completing 20 years in the Indian market, sold 6.78 lakh units last year in the country with a market share of around 16.5 per cent in the passenger vehicle segment.