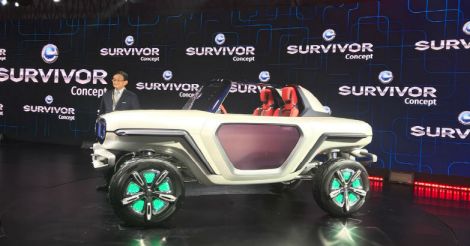 The two-seater e-Survivor is expected to give a tough fight to the conventional four-wheel drives.

New Delhi: Auto Expo 2018 kicked off on Wednesday with back-to-back press conferences from 8 am to 8 pm. Automakers were never so eager to meet up with the press since the launch of the expo in 1996. They all had something to boast of - a major switch to electric vehicles (EVs).

Leading manufacturers including Tata, Mahindra, Maruti and Leyland made it a point to highlight their electric vehicle offerings. Almost all models in the Tata pavilion had EVs. Tiago, Magic Iris minivan, Ace mini truck and even Marco Polo buses have electrical counterparts now.

While Leyland limited their electrical showoff to just one bus model, Mahindra and lesser known JBM made it clear that electrical buses were here to stay. JBM, which made its foray into India recently, presented buses with everything under the sun.

The company, which operates here through its...

The company unveiled its SP Concept, an SUV...

Mahindra also presented a novel two-seater concept named Udo. The compact vehicle can be pedaled or electrically operated. It is a two-seater with a roof over your head. It even has air-conditioning. Also on display were Trio and the company’s new electric power platform.

Maruti did not miss the point. Maruti Suzuki electric four-wheel drive is scheduled to hit the road in 2020. The two-seater e-Survivor is expected to give a tough fight to the conventional four-wheel drives. The company also launched its 'ConceptFutureS' car.

Tata's HFX SUV is almost ready to be on offer. The SUV boasts of the Range Rover platform. This one is sure to be a challenge to Evoque in price. Mahindra also offered a glimpse of its G4 Rexton. The beauty from the SsangYong stable is Mahindra's secret weapon against Tata.

Honda Amaze owners can expect heartburn when they see the new avatar of the model. The new model has eclipsed the older version in looks, styling and finishing. Honda plans to introduce the new Amaze and Civic in the next financial year.

The day of marathon pressers were also noted for an unprecedented rush for the press kits. Journalists were elbowed out by a sundry crowd who wanted to grab the free pens and memory sticks that came with the press releases.

The companies which conducted the pressers could do away with the goodies to ensure that journalists received at least the press releases.