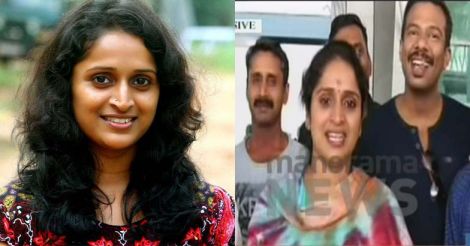 Salala (Oman): Surabhi Lakshmi, who won the National Award for Best Actress for her performance in Minnaminugu, said that she was not even aware that she was being considered for the award.

“I had absolutely no clue about the award. Only when people received me with bouquet did I came to know of it,” said the Malayalam actress, who landed in the Gulf country on Friday. The actress was overwhelmed when she came to know of the award and shed tears of joy.

“When I first read the script, I found the role to be a challenging one. It was the first time I used Thiruvananthapruam slang in a movie. But even then I didn't think that I will get a National Award for my performance. I just can't believe this,” a visibly emotional Surabhi told reporters.

Thanking the entire crew for making the film a reality, the Malayalam actress said, “This was a low-budget movie and it was the effort from each and everyone in the unit that helped in its release.”

Also check: This is an appreciation for Malayalam cinema: Mohanlal on getting special jury mention

The actress, who is in the Gulf country for a stage show, said she was dejected to be out of Kerala at this time of glory. She repeated that she would not have gone out of the state, if she had known about the award.