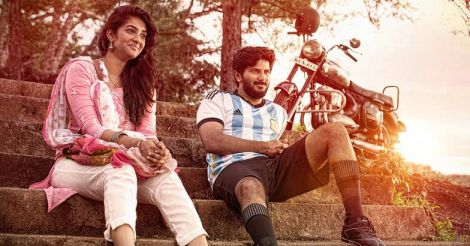 Red is the flavor of the season in Malayalam cinema. And comrade is the new fad in Mollywood, when it comes to the hero. Dulquer Salmaan's Comrade In America (CIA) is neither a movie about a comrade nor does it harp on communist moorings alone.

CIA is a movie without such pretensions, but it does dwell on recent political incidents laced with satire that would seem incorruptible for some, refreshing for others. It could even be naive for hyper-critics, but so be it.

The Dulquer movie cannot be approached through a single prism – it would be many things to a diverse umbrella of viewers. In other words, one size doesn't fit all.

It does eulogize the friendly neighborhood comrade much to the cheer of the young brigade of fans, who would relish every bit of lofty ideals and simple joys of life that the protagonist personifies as the plot evolves.

Dulquer Salmaan is ushered in with the aura of a mass appearance and that sets the tempo of narrative, which also hinges on a beautiful father-son portrayal, though they are opposite poles in the political spectrum.

Our friendly neighborhood hyper-local hero effortlessly wades through the romantic corridors of his locality and his adoring campus when cupid strikes. And when cupid strikes a comrade from a forbidden land (read The United States) and leaves him lovelorn by a quirk of fate, the trajectory of his seamless existence in a convivial environs needs to be shaken.

Read: It's a baby girl for Dulquer Salmaan and Amal Sufiya

Amal Neerad does not hesitate to shake the foundations of his hero's happy-go-lucky existence and thrust him on to a somewhat difficult journey in a hostile terrain, thereby altering the course and pace of the movie itself.

The young revolutionary embarks on his journey of a lifetime after deliberations with his mentors including Che Guvera, Karl Marx and Vladimir Lenin, who are summoned to an enlightened discourse about love and angst wrapped in the riddle of Leftist thought process.

But a passport, unrequited love of his parents and the resultant financial muscle does not necessarily get him a passage to the United States and there begins his journey of self realization that dares to dwell on the sensitive topic of illegal migration.

A suave element of pristine comedy, a host of selfless characters and profound thoughts are weaved in this Dulquer Salmaan-starrer. Amal Neerad sets free the narrative to weave its way on its own pace, knowing fully well that it can be embraced, given up or rejected.

Like the protagonist who travels all the way through Nicaragua, Honduras and Mexico to the US in pursuit of his first love, only to embrace loftier thoughts and simple joys of life, CIA can be embraced or rejected, but it can't be ignored. The bold moorings of this multidimensional plot ensures that.