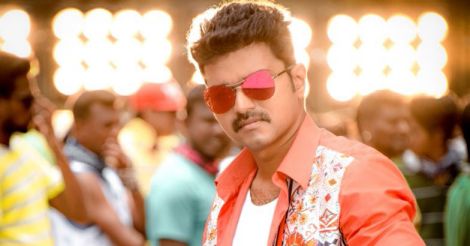 Four murders. All linked to the medical profession. That is how Atlee unveils or begins the Vijay-starrer Mersal, roughly translated as shock. The director justifies the title in the opening moments with intense shots related to the murders and the chase for a culprit. Atlee is also bold enough to unravel the hero for fans within five minutes. Vijay's appearance scenes are visual treats for fans.

Yes you heard it right: Some movies are purely for fans. And fans of fans. Mersal is a Diwali cracker for Vijay fans. The Atlee directorial will charm the fans with an elaborate canvas spun for the hero and a social message weaved into it.

And by handcuffing the culprit, whom you thought was the protagonist, Atlee may shock you again. But then, before the mystery plot unravels, you need to meet the first of the three heroines in a foreign locale. So we have to place the first of the four songs there. And we also dabble with a half-baked romance after the initial intense moments. And just when you feel Mersal begins to wobble, you are in for another shock in a magic show where a classic murder scene is unleashed.

From then on, Atlee conjures up some magical twists and turns to impress us right till the interval punch. Till then, apart from the first of the four songs, it is a cracker plot as the mystery deepens. The investigating officer himself is confused on who plotted and executed the murder: A magician, a doctor or a mix of both? 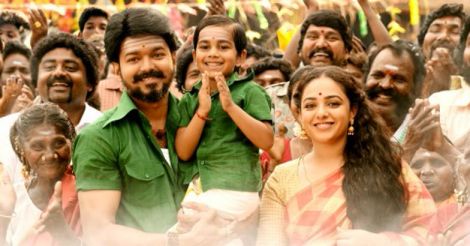 Mersal is a Diwali cracker for Vijay fans

The murder narrative also has some glimpses of finesse as the director chooses to have some neat word play in the dialogues between the culprit in custody and the investigating officer, played well by Satyaraj. But if Kattappa did strike a chord with the plot, the story teller of Baahubali, who did the job for Mersal also, then loses his plot to a subplot which is pedestrian.

That takes you to a second half where revenge emerges as the motive. Isn't that routine? It is. 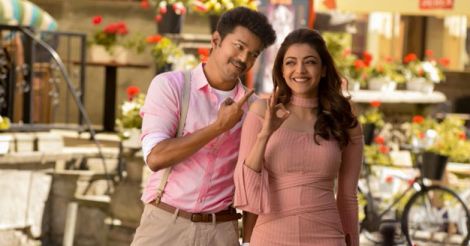 Before the mystery plot unravels, we get to see one of the three heroines in a foreign locale

If you thought why do we have three heroines for a star movie, the answer is we have a hero playing a triple role – two in the present and one unleashed in a flash back to put things in perspective.

The social message of the protagonist is the unethical practices in the medical profession against which a 'Rs 5' doctor emerges as a local hero, who has an international reputation.

After an opening with four murders, we have four songs by A R Rahman, but we need not dub it an A R Rahman musical. Action scenes have poise.

The build-up of S J Suryah as the villain will connect with the fans, but then, don't we need to justify that till the end. 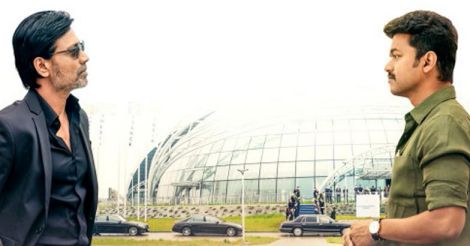 Atlee couldn't do justice to that part as various subplots and a scattering of events that plunge the movie out of control probably overshadow the treachery of the machinations of the villain, for whom the medical profession is a business and not a service.

And Hareesh Peradi shouldn't become a part of the formula for the villain's platform in Tamil. Atlee does not give any scope for the versatile actor to excel, like in Vikram Vedha. In other words, any one else could have been cast for that role.

And we have no clue why the camera should pan to a Cesarean in a mass entertainer movie. 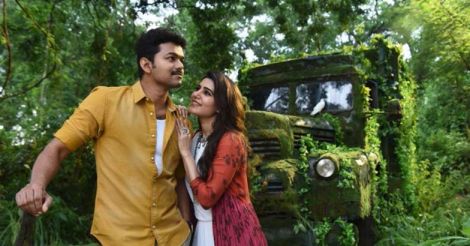 Vijay and Samantha in the movie

Perhaps that is to drive home the social message, for which the hero addresses his core audience with loaded political statements that drag even the contentious GST into the plot. Do you smell a rat?

Either way, Mersal will definitely charm fans if we are to go by the audience reaction for an early morning show in Kottayam. More than that, we go back again to four songs, three heroines and a triple role for the mass hero. Nothing more, nothing less.