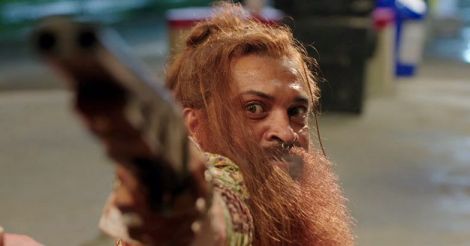 Kochi: Actor Soubin Shahir, who still basks in the glory of the incredible success of Sudani From Nigeria, essayed a significant role in Manju Warrier-starrer Mohanlal as well. The nameless character played by Soubin was one of the highlights of the film and the extremely talented actor didn't disappoint his fans.

Now a video song which introduces Soubin's character in Mohanlal is the latest hit on the social media. The video features some off-screen visuals related to the canning of the movie and the superb transformation of Soubin as the nameless character. Suhail Koya has written the lines of this song composed by Prakash Alex, who also composed the background score of the movie. Justin Fernandez has amazingly rendered this song.

Another song 'Thoovennila...' has 'Mohanlal references' throughout and was equally loved by the countless fans of the screen icon.

Lady superstar Manju Warrier plays the role of Meenukutty, a diehard fan of actor Mohanlal. Indrajith too plays a significant role in the movie.

The teaser of the movie in which Manju is seen dancing excitedly to the superhit song 'Azhakaana Neelimayil...' form the 1990 movie No 20 Madras Mail, also took the social media by storm.