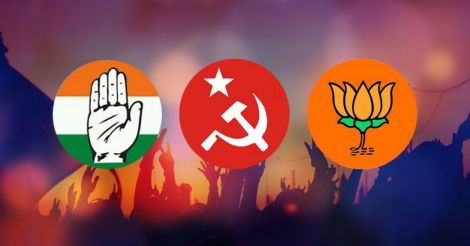 Alappuzha: The Election Commission's decision to postpone the schedule for the Chengannur by-poll has triggered a war of words among the three major fronts, the LDF, UDF and the NDA.

Both the LDF and the UDF alleged that the BJP-led NDA government at the Centre has been putting pressure on the commission to delay its announcement, while the saffron party’s state leaders countered the charges by stating that such baseless arguments reflected the two fronts' lack of self-confidence.

Nevertheless, the main leaders of the three fronts have left the campaign trail mid-way due to the uncertainty over the poll date. They fear that since the EC has the option to conduct the election on any date before July 14, candidates and party workers will have to go through a gruelling campaign in the middle of a harsh summer.

“The BJP, using the influence of its power at the Centre, has been exerting pressure on the Election Commission to delay the announcement of the date for the Chengannur election. They are resorting to such unscrupulous methods because they fear a backlash in the upcoming by-polls in other states, especially in North India,” said leader of opposition Ramesh Chennithala.

According to CPM state secretary Kodiyeri Balakrishnan, the decision to postpone the by-election is part of a larger conspiracy to sabotage parliamentary democracy.

“The Election Commission is a tool in the hands of the BJP at the Centre. Apart from delaying the election, it seemed that they are also hatching some devious plots using government servants. The Commission removed the Chengannur RDO and a sub-collector was appointed in his place as the electoral officer in Chengannur. The move is to announce the poll schedule only after the BJP positions itself in a much more advantageous position in the campaign,” he alleged.

The BJP state leadership, however, dismissed the charges and claimed that the party had no role in the delay in announcing the poll date.

“Both the LDF and UDF have realised that their losing their grip. What they are doing now is citing reasons for their loss in advance. The Election Commission is expected to take an appropriate decision at the right time,” said BJP state secretary B Gopalakrishnan.