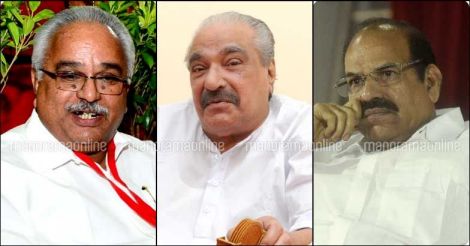 Thiruvananthapuram: A day after the date of the Chengannur bypoll was announced, the political jockeying has gathered steam.

Hinting at fissures in the Left Front on the approach towards Kerala Congress (M), CPM state secretary Kodiyeri Balakrishnan on Friday stated that his party would accept vote from anyone. His stand is in stark contrast to CPI counterpart Kanam Rajendran's remark the other day that the Left doesn't need the help of Kerala Congress (M) chairman K M Mani in the Chengannur bypoll.

Without taking the name of CPI state secretary, Kodiyeri also said that those in the Left front should not air different views in public. "The constituent partners do not have any right to say that Left do not need votes of other parties. Saji Cherian will win from Chengannur bettering the lead from the last time," said Kodiyeri referring to the prospects of the LDF candidate.

Kanam had said on Thursday the Left candidate in Chengannur doesn't require Mani's vote. This was in response to LDF candidate Cherian's statement that he needs votes from everyone to win.

Meanwhile, Cherian told Manorama News that Left Front leaders would take a decision on the opinion expressed by Kanam. He said he welcomes the votes of all sections other than those of communal forces.

Meanwhile, KC(M) supremo K M Mani lashed out at Kanam for his remark. He said KC(M) knows whom it should vote for. Mani alleged that CPI's intention was to defeat the CPM candidate in the poll. He also took a dig at CPI saying that if CPM loses the bypoll, CPI has nothing to lose.