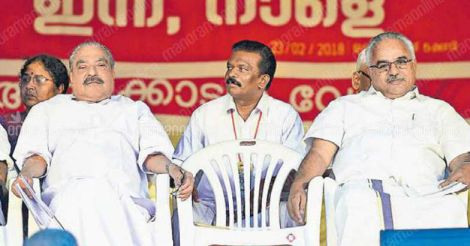 The CPM's attempt to draw KM Mani's Kerala Congress (M) to the Left front has irked ally CPI and its state secretary Kanam Rajendran and his league of leaders: File photo

The two left parties have been clashing over the contentious support of Kerala Congress- M leader K M Mani in the upcoming Chengannur byelections in what has now become a public spat.

The dispute erupted after CPI state secretary Kanam Rajendran announced that the LDF does not need Mani’s support at Chengannur. However, CPM state secretary Kodiyeri Balakrishnan refuted this statement, saying CPI cannot take a decision on its own in the LDF. “We will accept Mani’s votes,” Kodiyeri added.

Meanwhile, Kanam made an attempt to defuse the crisis, saying that he had never announced that LDF would not need the votes of a particular section.

But his partyman Binoy Viswam launched a much more scathing attack on Mani. “Mani represents a brand of politics which is much hated and despised,” said the CPI leader. With both CPM and CPI sticking to their respective positions, it remains to be seen how the war of words would reflect in the poll outcome, pitched less than a month away.

K M Mani added fuel to the fire by saying that the CPI would prefer the LDF candidate to lose as he belongs to the CPM. The LDF candidate had met him personally to seek votes, added Mani.

CPI believes that LDF can win in Chengannur even without the support of Mani. It feels Mani on the LDF side would later invite trouble.

CPI members are also circulating a booklet which was brought out by the LDF against Mani. The opposition against Mani is not only an issue of political stand but also survival, according to the CPI, which has been quite agitated about the changing stands of the CPM.

In a scenario where CPM allies with the Mani group and expands the LDF, the most affected would be the CPI.

CPM realizes that the situation in Chengannur is different from that during the Malappuram or Vengara by-polls. CPM is firm on winning a battle in a place where both CPM and Congress have good rapport. CPM also feels a loss at Chengannur would be considered as a failure of the Pinarayi government. A win would infuse tremendous energy into the rival UDF camp.

The talks regarding CPM-CPI merger were first heard during the term of Veliyam Bhargavan as CPI secretary. Veliyam and the then CPM secretary Pinarayi Vijayan had also been engaged in a war of words over the merger issue.

Sudhakar Reddy, at the party congress in Kollam, had said that the situation for a merger was becoming favourable after the CPM party congress in Hyderabad. The differences between the parties came to the fore after this statement.

Reddy said the Left Front should move together and both CPM and CPI have to consider moves for unity. CPM secretary Sitharam Yechury spoke about the merger of the communist parties in Nepal. However, the Kerala members of both parties are in no mood for unity.