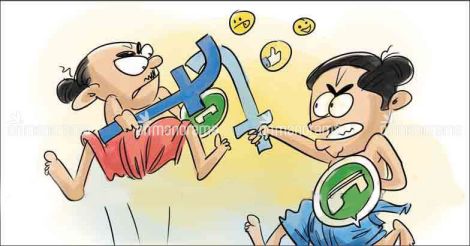 No negative campaign targeting rival candidates has been seen so far in Chengannur. However, the teams resort to trolls and posts in a defensive way, whenever the situation demands.

Chengannur: The social media campaign by all three political fronts has heated up in the Chengannur legislative assembly constituency, which is witnessing a fiercely contested bypoll later this month.

Along with grassroot-level workers, groups representing the new media accompany all the candidates. Instead of engaging public relations agencies which demand big money for bringing the contestants to a 'touch-screen distance' of the voters, all parties have deployed their own workers for the social media campaign.

The new-gen campaign of UDF candidate D Vijayakumar of the Congress is being managed by the IT cell of the KPCC. The party workers involved in this effort live stream videos and photos of the candidate seeking votes. The group is headed by Dhana Sumod, Renjith Balan and Sudheer Mohan.

The main opposition front highlights the false promises made by the state and central governments. Inauguration of projects which are yet to be completed and the failure to bring about development are also the other focus areas of the UDF’s social media push.

Meanwhile, a five-member team is in charge of the LDF candidate Saji Cheriyan’s online media campaigning. Videos and posts of the developmental initiatives implemented by the state government in Chengannur are the main planks of the LDF’s drive to woo voters. The LDF also circulates trolls and photos making fun of the opposing candidates, adding vigour to the election scene.

NDA candidate P S Sreedharan Pillai’s social media drive is led by a seven-member team. Their main task is projecting the central government’s developmental projects and Pillai’s political activities. The team aims to familiarise the maximum number of voters with the initiatives of the central government. Jithin Dev, Anoop G Nair and Kailas Nath are heading its social media team.

Interestingly, no negative campaign targeting rival candidates has been seen so far in Chengannur. However, the teams resort to trolls and posts in a defensive way, whenever the situation demands.