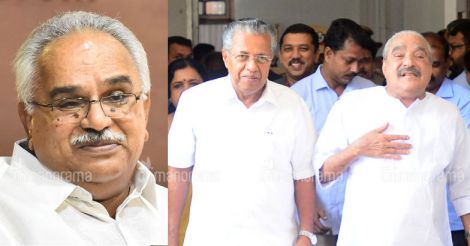 The ongoing parleys and backstage moves over inviting K M Mani to the fold give an impression that both the CPM and the CPI remain poles apart in their approaches to the expansion of the Left Democratic Front (LDF).

To the question whose stance would prevail, the CPI has made it apparent in no uncertain terms in their political review report adopted at the party’s 23rd state conference held in Malappuram. The report carried the following statement which indicates that the party is in no mood to entertain Mani and his party:

"There are moves to take Kerala Congress (M) into the LDF fold. It had happened in the past too. There were similar attempts to stich up an alliance with the Democratic Indira Congress-Karunakaran (DIC-K) and the People's Democratic Party (PDP) in the Ponnani Lok Sabha seat held by the CPI."

What warning does the CPI try to serve? Whether it is a message to K M Mani that he would also meet the same fate as K Karunakaran and Abdul Nasser Madani? It also reminds us of the fact that the wrangling between the two parties over admitting new allies to the front is not a new phenomenon.

The argument put forth by the CPI state leadership when the party's central secretariat deliberated on the CPM's suggestion to seek Mani's support in the upcoming Chengannur by-election was perplexing.

Holding out the front's experiences with the DIC(K) and Madani as an example, they said: "We have serious doubts whether the CPM takes decisions on the expansion of the front with any political rationale or seriousness." The gist of this argument was that whether the leftist conscience would assent to the attempts to welcome somebody like K Karunakaran who once spearheaded the anti-communist front in Kerala or bring Madani, who is haunted by ghosts of the past, into the LDF fold. They raise similar apprehensions in Mani's case too.

At present, it is the failure of the leaderships to thrash out differences which hurts the LDF deeply. The CPM is looking forward to make gains in the next Parliament elections. For that to happen, the UDF has to be torn to shreds. Kerala is the only state where the Left has a fair chance to win maximum number of Lok Sabha seats. However, the front cannot always be content with the average vote share of 43 percent. That is why the CPM's keenness to welcome Mani or Sobhana George or whoever is ready to join the front is based on a simple logic.

The CPI, on the other hand, does not endorse such an idea. At the Delhi meet, CPM Kerala leaders had tried to lure the CPI by explaining the potential benefits for the party if Mani extends support to the front in the Chengannur by-election. Their point was that the alliance with Mani would help the CPI regain the Mavelikkara Lok Sabha seat. The CPI reacted to this theory by stating that the rift in the Kerala Congress-Congress alliance may offer the LDF its best ever chance in the Kottayam Parliament seat. Even Pala, which is considered a stronghold of the Kerala Congress (M), does not seem insurmountable.

However, things will not be easy in P J Joseph's Thodupuzha and Mons Joseph's Kaduthuruthy constituencies. Since these two are likely to continue in the UDF even if Mani decides to cross over to the LDF camp, this hypothesis has no relevance whatsoever. As per CPI’s estimation, Kerala Congress (M) may be able to secure a maximum of 3,000 votes in Chengannur. If they decide to support the UDF, the entire votes at their disposal will go in favour of D Vijayakumar. And in case they back the LDF candidate, the LDF candidate is going to receive only half of their vote share, the CPI argues.

Taking a look back at the past, it was the CPI who vehemently opposed the move to forge a tie-up with Madani. In the CPM, they had an unlikely supporter in the form of V S Achuthanandan. Interestingly, the CPI was not at all against the alliance with DIC(K) initially. It was evident from the fact that K Karunakaran was among the leaders to whom Pannyan Raveendran presented celebratory sweets soon after he won the 2005 Thiruvananthapuram Lok Sabha by-poll. But when the CPM Politburo and Achuthanandan objected to the tie-up with a 'corrupt' party, the CPI too joined forces with them as an afterthought.

Yet, Karunakaran and K Muraleedharan maintained a desperate and relentless effort to join the LDF by merging with the Nationalist Congress Party (NCP). The first test for the Achuthanandan-led LDF government came up in the byelection to the Thiruvambady assembly constituency in 2006.

In that election, no party exhorted its cadres to vote according to their 'conscience'. Muraleedharan, who had by then become the NCP state president, convened a party convention and announced that the NCP would support the LDF in the by-poll. In a keenly fought contest, LDF's George M Thomas managed to scrape through with a majority of 246 votes. The father-son duo's hopes of joining the LDF bandwagon received a boost after Pinarayi Vijayan made a public statement that the NCP’s support was decisive in the front's victory in Thiruvambady.

However, the CPM central leadership blocked the entry of Karunakaran and Muraleedharan into the LDF through the backdoor. The CPI bristled with rage at the LDF state committee meeting. The NCP, which had been an LDF constituent until then, was expelled from the coalition after Muraleedharan became its president! The NCP leaders who arrived at the AKG Centre for a reconciliation meeting on December 11, 2006, were humiliated and sent back.

That was the final scene when curtains came down on the LDF's ambitions of expansion last time. The curtains have gone up again and occupying the centre-stage is another father-son duo - K M Mani and son Jose K Mani!