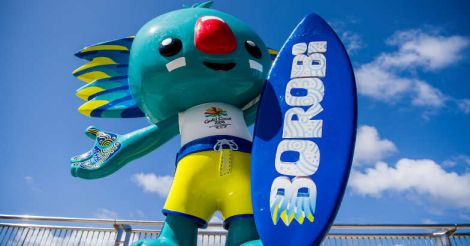 A statue of Borob, the official mascot of the 2018 Gold Coast Commonwealth Games, is pictured near the beach on the Gold Coast on Monday. AFP

Gold Coast: In perhaps the first-of-its-kind case of embargo violation in a multi-sport event, popular Australian network Channel Nine's accreditation was cancelled by the Commonwealth Games Organising Committee after it leaked a video of the opening ceremony's dress rehearsal.

"Someone was in the venue, took pictures of the Opening Ceremony. The other 16,000 volunteers and people respected the fact we asked them not to do it (broadcast it). And then they put it on their news service," Games organising committee CEO Mark Peters said here.

However, the suspension will be reviewed after the opening ceremony on Wednesday.

"When people are given the privilege to come in and watch an event and they break the rules, that's not high performance, that's infringing on the spirit which these Games represent," Commonwealth Games Federation CEO David Grevemberg said.

The details of the opening ceremonies at major sporting events are usually embargoed for media, which is given early access to the event to prepare themselves.