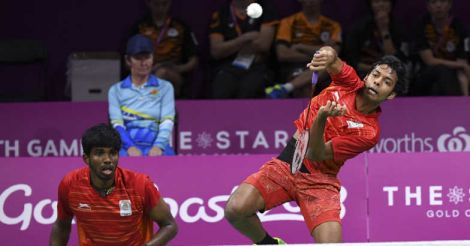 Gold Coast: India's Satwik Rankireddy and Chirag Shetty settled for the silver medal in men's doubles badminton at the 21st Commonwealth Games after going down meekly to England's Marcus Ellis and Chris Langridge here on Sunday.

The Indian pair lost 13-21, 16-21 in the summit clash that lasted 39 minutes at the Carrara Sports Arena and it brought an end to India's campaign at the Games.

The Indian duo lacked the intensity from the start trailing 7-11 midway into the opening game. The English pair continued to pile the misery after the break taking a 14-9 lead and later closing the 16-minute affair at 21-13.

The second game saw a much better effort from the Indians. Bu they failed to take the lead as Marcus and Chris surged ahead with an 11-5 lead at the break.

The story remained the same in the second half as the Britons rose to a 14-10 lead even after the Indian pair scored four consecutive points to eat into the lead. But unforced errors at the net once again cost India as Marcus and Chris took full advantage to close out the tie and clinch the gold.

India finished their campaign with 66 medals in third spot.

This also means India ended up with two more medals than the last edition in Glasgow. But what's more heart-warming with respect to medal tallies is that India have almost doubled the number of golds from 2014.

The actress has been shooting back to back for her pending assignments since her return from Dubai.