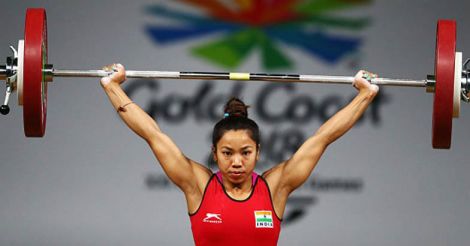 Mirabai Chanu smashed the Commonwealth and the Games record in snatch, pulling off clean lifts in all her three attempts. Photo: Twitter

In a remarkable performance, Chanu smashed the Commonwealth and the Games record in snatch, pulling off clean lifts in all her three attempts (80 kg, 84 kg and 86 kg).

She then lifted more than double her body weight (103 kg, 107 kg and 110 kg) in three successful attempts to claim the clean and jerk as well as the overall Games record.

The showing helped her better the silver she had won in the 2014 Glasgow CWG.

The Indian ended with a score of 196 kg (86 kg+110 kg), earning a massive applause from the fans at the Carrara Sports and Leisure Centre.

The 23-year-old's previous best was a total lift of 194 kg (snatch 85 kg and 109 kg in clean and jerk) achieved in the World Championships a few months ago.

Her nearest but still a very distant rival, Amanda Braddock of Canada failed to complete a single lift in the clean and jerk after managing a best of 76 kg in snatch.