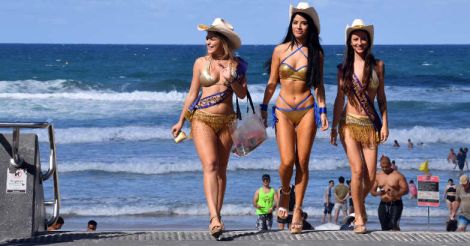 Gold Coast: The Gold Coast's iconic meter maids, famous for their flowing locks and gold bikinis, have accused Commonwealth Games organisers of booting them off the streets during the competition.

The scantily clad women have been a feature of the Australian holiday hotspot since the 1960s, topping up parking meters to help beach-goers avoid fines. But trouble is brewing in paradise and meter maids chief Roberta Aitchison has slammed Games organisers for allegedly preventing her staff from working.

"The Commonwealth Games for the meter maids has been a bullying experience," the 63-year-old told AFP.

"The meter maids have been around for 53 years and are iconic to the whole of the Gold Coast. We add that little bit of sex appeal, glitz and glamour to the beautiful beaches," added Aitchison.

"(The organisers) have directed the council to get us off the streets. We feel a little bit like homeless people."

Games chief organiser Peter Beattie denied the claims about the meter maids, who were once employed by local authorities but have now shifted to a more commercial role.

But the meter maids have been banned from asking for donations while posing for photos with tourists -- income that helped them feed the parking meters. Games officials have also been seen shooing meter maids away from the beach at Surfers Paradise since the Games began on April 4.

"They've made it a suppressed Games," fumed Aitchison, a meter maid herself back in the eighties.

"There's more policemen here than there are athletes and tourists."

The meter maids were also miffed Games organisers chose not to include them in the opening ceremony.

"We should have been part of it because we're part of the history but we were told we're not welcome," Aitchison said. "It's a slap in the face."

Beattie claimed the meter maids had wanted to charge money for use of their image, prompting organisers to choose child surf lifesavers for the ceremony instead.

"They have an iconic history, no doubt about it, but we don't have time to waste on that kind of an argument," he said.

"They threatened legal action. Then to turn around and complain (about being left out), that's a bit silly -- it's like Monty Python."

Beattie also dismissed accusations the meter maids were being singled out, after they were seen being removed from a beach-side promenade.

"I expect all our employees to keep all these venues safe and comply with the laws regarding to workplace, health and safety," he said.

"We have to keep people safe and I make no apology for that."

Feeding parking machines has become less central to the role of the meter maids, who have now opened a bar. For some, they are a relic of a bygone age.

"They are a symbol of the past," said sociologist Adele Pavlidis from Griffith University.

"But the Gold Coast has changed a lot and it is important that our streets are not hyper-sexualised in that way," she added.

"It was an important part of our colourful history but today I don't think it needs to be part of our landscape."

But meter maid Estefania Marquez, one of three girls ordered off the beach at the weekend, defended her right to walk around in high heels and a bikini.

"You go to the beach and you see girls topless," said the 27-year-old.

"We provide a public service, we help people."