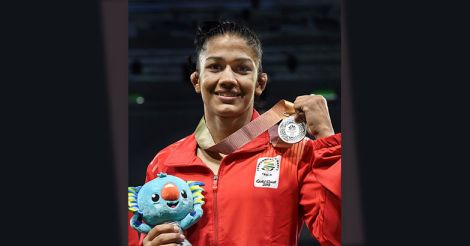 Babita lost 2-5 to Canada's Diana Weicker in the final. Babita, who claimed a silver in the 2010 edition before a gold in Glasgow, failed to break through her rival's defences.

Bose Samuel of Nigeria got the bronze.

Weicker forced the early advantage by taking a 1-0 lead in the first round.

Although Babita managed to execute a two-point in the second round, the Canadian notched up four more points to wrap up a comfortable win.

Earlier, Babita started off by defeating Bose Samuel of Nigeria in her opening bout. Babita shook off a strong start by the Nigerian to clinch a 3-1 win.

Samuel had taken the early lead, but Babita pulled off a two-point move to put her nose ahead. She earned another point with a takedown to bolster her lead.

Babita was even more dominant in her next bout, defeating Sri Lanka's Deepika Dilhani by fall early in the first period.

The Haryana wrestler was too good for Carissa Holland of Australia as well, clinching another victory by fall to enter the final.

Meanwhile, Kiran added to the Indian medals tally by bagging bronze in the women's 76kg category.

She outclassed Katouskia Pariadhaven of Mauritius by technical superiority for the bronze medal.

Kiran had built up a 10-0 lead in the first period itself which prompted the officials to award her the bout.

Bouts are awarded on the basis of technical superiority when one wrestler takes a lead of 10 or more points.

Canada's Erica Wiebe emerged champion in the category while Blessing Onyebuchi of Nigeria got the silver.

Kiran had lost to Blessing in the semifinals. Kiran was no match for the Nigerian, conceding a 0-10 deficit in the first round itself to lose by technical superiority.

Kiran had started her campaign by defeating Danielle Sino Guemde of Cameroon by technical superiority.

She took a 4-1 lead in the first round before scoring seven consecutive points in the second to wrap up the victory.