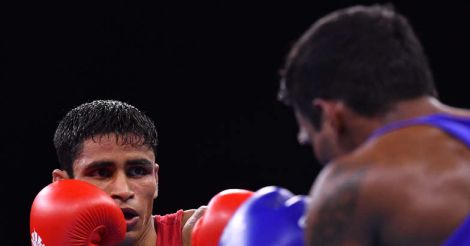 Amit outclassed Juma Miiro of Uganda by a unanimous 5-0 verdict in the semifinals of the men's light flyweight (49 kilogram) category.

Gaurav overcame a tough fight from Vidanalange Ishan Bandara of Sri Lanka in the last four stage of the men's flyweight (52kg) division.

Kaushik got the better of James McGivern of Northern Ireland in a tough, tactical battle in the men's lightweight (60kg) semifinals.

However, the Indian camp faced disappointment in the men's heavyweight (91kg) division as the promising Naman Tanwar lost in the semifinals.

The talented youngster lost 0-4 in a well-contested bout to Jason Whateley of Australia.

Naman will, however, return with a bronze medal.