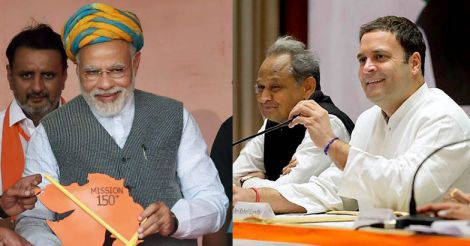 Prime minister Narendra Modi spearheaded the campaign for the ruling party and president of Congress Rahul Gandhi helmed the stumping for his outfit.

New Delhi: Rubbishing the exit polls which predicted a clean sweep for the BJP in both the Gujarat and Himachal Pradesh assembly elections, the Congress on Thursday said they were done under pressure from the BJP and were "absolutely wrong".

"Exit poll came in Bihar, Goa, Punjab and Delhi as well. This is the same kind of exit poll, which has been shown under pressure from the BJP," Gujarat Congress chief Bharatsinh Solanki told IANS.

"As the elections were conducted under pressure from the BJP government in Gujarat, likewise the exit poll was also done under pressure," he added.

Solanki said the Bharatiya Janata Party will be washed out in Gujarat. "The exit polls are absolutely wrong. We will win 120-125 seats."