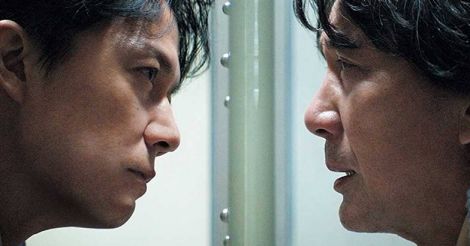 Hirokazu Kore-eda’s legal thriller, The Third Murder, is an intriguing puzzle where a man struggles to find the truth while questioning his own faith. The film shows that humans cannot judge one another and that our social background also decides our level of justice at birth. The film tries to deconstruct the concept of the death penalty in Japan.

The film begins in a riverbed on a dark night as a man named Misumi bludgeons another person to death and burns his body. The victim was the manager of a food products factory where he was employed. Misumi happily confesses to the obvious case of murder and burglary but when he meets his lawyer Shigemori, he starts to change his story. Misumi has already spent 30 years in prison for a double murder and the third one makes it an open and shut case. The film poses serious questions about the judicial system while Shigemori tries to get Misumi a life sentence instead of death penalty.

The most part of the movie is set in prison as Misumi and Shigemori sit on either side of the glass divider and speak through the holes. The interview room face-offs are one of Kore-eda’s best camera techniques where one’s reflection is superimposed on another in the glass divider. The film makes us ponder whether truth itself is opaque or the way we judge people and make out the truth is just temporary.

Shigemori, the son of the retired judge who considered Misumi’s case 30 years ago, realizes that the only evidence against Misumi is his confession to the crime and not a single materialistic evidence was found. Though Shigemori tries to get Misumi say a different story to reduce the sentence, Misumi’s vagueness in explaining what happened on that fateful night puts everyone into turmoil.

Misumi’s lawyer finds various versions of his story. One theory is that of an interview given to a magazine where he accuses victim’s wife of persuading him to commit the crime. But he changes the story later and says he murdered the man as he sexually abused his own daughter, whom Misumi was close to.

The trial begins but Misumi again comes up with a different version of the crime- this time claiming he has never even committed it. Shigemori too finds it difficult to judge him in order to find the real truth. Earlier, it was the same lawyer whose intention was not to find the truth but to help his client reduce the sentence. Shigemori finds himself searching for truth.

Both characters slowly overlap when they talk through the glass doors. It takes Shigemori to his past while Kore-eda tries to show that each of us is guilty of something. Statements like “law considers it worse if you kill for money” and “some people are never meant to be born” pose serious questions to oneself.

Is there someone out there playing with our lives? Should anyone have control over another person's life? Should human beings be judged? If yes, on what basis? What’s truth? Kore-eda puts forward such blurry questions and points out that past resides in the human mind and it’s difficult to judge or to be judged.

The Third Murder is mysteriously beautiful and gives a different outlook on human nature. A must watch in this edition’s IFFK.