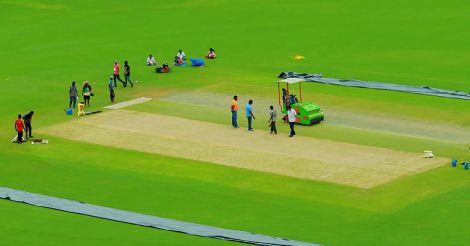 Ground staff working on the pitch of the Greenfield Stadium in Thiruvananthapuram on Sunday which is hosting the third India vs New Zealand T20 on Tuesday. PTI

Thiruvananthapuram: The prison's department will set up 12 food courts at the Greenfield Stadium, Kariyavattom, the venue of the third and final T20 international between Indian and New Zealand on Tuesday.

The food courts would basically serve the famous "jail chapathis" or chapathi's made by inmates of Poojapura central prison, which is popular in the state capital, where it is sold at reasonable prices.

The food courts will have chapathi, chicken curry, veg curry and snacks.

The department, which has deployed 90 personnel for this, is sticking to green protocol and chapathis would be served in paper rolls to avoid use of plastic.

Prisons department staffers would also assist in cleaning the Greenfield stadium on November 8, a day after the decider T20 match.