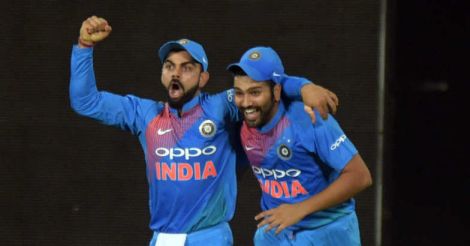 Thiruvananthapuram: India snatched a thrilling 6-run win over New Zealand in the third and final Twenty20 International (T20I) at the Greenfield Stadium at Kariavattom here Tuesday night to clinch the series 2-1.

Indian captain Virat Kohli was delighted with his team's fighting spirit as they defended a rather modest total of 67 in a match reduced to 8-overs-a-side due to rain. It was a night on which Kohli made a few brilliant moves like bowling out Bhuvneshwar Kumar early on in the innings and making India's best death bowler Jasprit Bumrah bowl the penultimate over instead of keeping him for the final over.

Bumrah only went for 10 in his final over which meant Hardik Pandya had 18 runs to defend. The all-rounder began the final over well by conceding only a single off the first two deliveries. But Pandya gave Kohli and the Indian team a real scare when he was struck on the left hand by a full-blooded shot from Kiwi all-rounder Colin de Grandhomme off the second ball. Pandya did well to put his hand out, but he could not hold on to a really tough chance. He was writhing in pain and the Indian physio had to come out to attend to him.

Kohli revealed in the post-match press conference that he was really worried when Pandya got injured and was wondering whether he would have to bowl the final four deliveries with the series on the line. Kohli did not want Grandhomme to face chinaman bowler Kuldeep Yadav in the final over. Kohli, who bowls medium-pace occasionally, has almost stopped rolling his arm over after taking over the captaincy from MS Dhoni.

Fortunately for India, Pandya recovered and despite him going for a six off the very next ball and conceding a wide, the youngster held his nerve to close out the game.

On hindsight, it would have been good fun to see Kohli bowl the final four deliveries with 17 to defend! The Indian skipper, who can do no wrong at the moment, could have probably sealed the tie, with his bowling for a change!