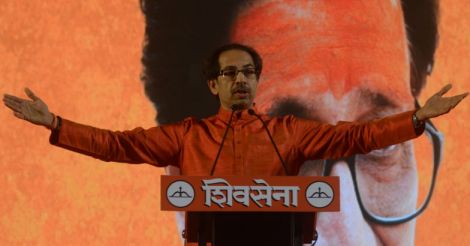 New Delhi: The NDA on Tuesday got a major boost when its sulking constituent Shiv Sena supported its presidential candidate Ram Nath Kovind, who looks set to be the next president, even as a truncated opposition is bracing for an "ideological" contest.

"We are supporting Ram Nathji's candidature and our best wishes are with him," Sena president Uddhav Thackeray said after a 90-minute meeting with his party leaders at his Bandra home in Mumbai.

The Sena, which shares power at the Center and in Maharashtra, has been in a love-hate relationship with the BJP. On Monday, Thackeray was critical of Kovind's choice, describing it as caste appeasement. The Sena didn't vote with the NDA in the last two presidential polls.

The NDA, including Sena and the PDP of Jammu and Kashmir, which also extended support to Kovind on Tuesday, commands the support of 48.93 percent in the electoral college made up of MPs and MLAs.

With the backing of parties outside the alliance like TRS (2 percent), AIADMK (5.39 percent), YSR Congress (1.53 percent) and BJD (2.99 percent), the NDA's support would cross the half way mark comfortably to reach nearly 61 percent in the July 17 battle.

It remains to be seen how the JD-U, BSP and Samajwadi Party, with a total vote value of over 5 percent, vote. Also on Tuesday, Samajwadi Party founder Mulayam Singh Yadav described Kovind as "a wonderful choice".

The names doing the rounds as possible opposition candidates include former Lok Sabha speaker Meira Kumar and former Maharashtra chief minister Sushil Kumar Shinde, both of the Congress and both dalits.

Congress leader Ghulam Nabi Azad on Tuesday flew to Patna to consult Bihar chief minister Nitish Kumar of the JD-U, which reportedly is said to be not averse to backing Kovind. Azad's meeting comes ahead of a JD-U meeting on Wednesday on the presidential election.

Kovind was till Monday the Bihar governor and shared a warm relationship with Nitish Kumar. The Bihar chief minister is known to take a line different from other political parties as was reflected on the demonetization decision.

Azad would also meet RJD chief Lalu Prasad, who leans towards the Congress.

The names of Meira Kumar and Shinde have been floated to counter the NDA so that parties like the BSP would have no problem going against the NDA dalit candidate.

Congress sources feel Shinde could be a better candidate due to his record in public life.

The Left parties are keen on the opposition putting up a candidate because they see the presidential election as an "ideological battle" and the NDA candidate as an RSS-backed man.

"For the Left, the president's election has become a battle of ideologies and a battle for safeguarding the Constitution and secular democracy. This is how we look at it," CPI national secretary D. Raja said.

A final call on the anti-Kovind candidate will be taken at a meeting of the opposition front on June 22, Raja said.

The Left parties, which were earlier garnering support for former West Bengal governor Gopal Krishna Gandhi, are slated to meet on the morning of June 22. Among the candidates the Left is looking at is Prakash Ambedkar, the grandson of the iconic B.R. Ambedkar.

But with the TRS, AIADMK and BJD swinging Kovind's way and the BSP speaking in two voices, the opposition's strength certainly looks depleted.