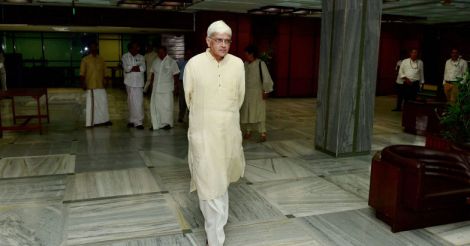 UPA vice-presidential candidate Gopalkrishna Gandhi after the UPA meeting where he was welcomed, in New Delhi on Sunday. PTI

New Delhi/Bhubaneswar: Former West Bengal governor Gopalkrishna Gandhi on Tuesday filed his nomination for vice-president in the presence of senior Congress and other opposition leaders, including from the JD(U).

Gandhi has been picked by 18 opposition parties to be their nominee for the post of vice-president.

The Congress was represented by senior leaders such as president Sonia Gandhi, vice president Rahul Gandhi, former prime minister Manmohan Singh as well as Ghulam Nabi Azad and Mallikarjun Kharge as the former West Bengal governor filed his papers in the parliament complex.

The BJD had supported NDA candidate Ram Nath Kovind in the presidential election, polling for which was held on Monday. However, Patnaik preferred to go with opposition parties this time.

BJD parliamentary party spokesman Kalikesh Singhdeo said, "Patnaik has proved that the BJD has been maintaining equal distance from the Congress and the BJP."

Patnaik had in 2012 said Gandhi was an "old and valued friend. We were friends even when I was not in politics".

The vice presidential is scheduled to be held on August 5.

Gandhi will contest against the NDA's candidate Venkaiah Naidu.