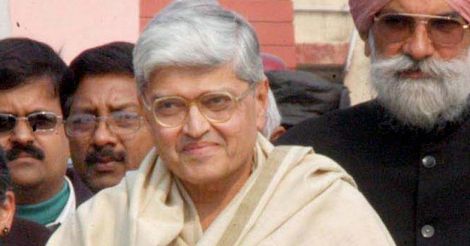 New Delhi: Gopalkrishna Gandhi, grandson of Mahatma Gandhi, is an acclaimed civil servant, diplomat and governor, who is a strong votary of secular ethos, and has clear and independent views.

Chosen on Tuesday as the candidate of eighteen opposition parties for the vice-president's election, Gandhi, 72, had a distinguished career in the civil service before he became a diplomat and governor. Later, he turned an academic, author and columnist.

Gandhi's term as West Bengal governor between 2004-09 coincided with the violent land struggles in Singur and Nandigram that contributed to the Left losing its dominance in the state and Trinamool Congress replacing it in power in the state.

As governor, Gandhi spoke his mind on the farmers' agitation that earned the ire of the then Left government. Now both Left parties and Trinamool Congress are supporting his candidature, reflecting his ability to effectively deal with contentious issues and draw cross-party support.

Gopalkrishna Gandhi was born on April 22, 1945, to Mahatma Gandhi's son Devdas, and Lakshmi, daughter of C. Rajagopalachari, the last governor-general of India. He graduated with a Master's degree in Literature from St. Stephen's College in Delhi.

Gandhi joined the Indian Administrative Service (IAS) in 1968 as a Tamil Nadu cadre officer and is credited with preparing the first district gazetteer for Pudukkottai.

He worked among the tea plantation laborers of Indian origin in Sri Lanka as first secretary in Indian High Commission's Kandy office.

In 1992, he took voluntary retirement from the Indian Administrative Service (IAS) and was appointed the director of the Nehru Centre at the High Commission of India, London.

In 1996, he was appointed High Commissioner for India in South Africa and Lesotho.

Gandhi was also secretary to then president K.R. Narayanan.

He was appointed the High Commissioner for India in Sri Lanka in 2000. In 2002, he was made Ambassador of India to Norway and Iceland.

Gandhi at present is working as professor of Political Science, History and Indian Civilizations at the Ashoka University, Sonepat (Haryana).

After Narendra Modi led the Bharatiya Janata Party (BJP) to victory in the 2014 Lok Sabha elections and had not yet taken oath as prime minister, Gandhi wrote to him an open letter, in which he greeted Modi but also said he was not one of those who wanted to see the BJP leader reach the high office.

He regularly wrote on issues stressing the need for the country to keep up secular values.

Gandhi has authored a novel "Saranam" (English version "Refuge") and a play in verse "Dara Shikoh".

His other books include "Gandhi and South Africa" and "Koi Acchha Sa Ladka" (translation into Hindustani of Vikram Seth's novel 'A Suitable Boy'). He has also edited "The Essential Writings" of Mahatma Gandhi for Oxford University Press.

He and wife Tara Gandhi have two daughters.