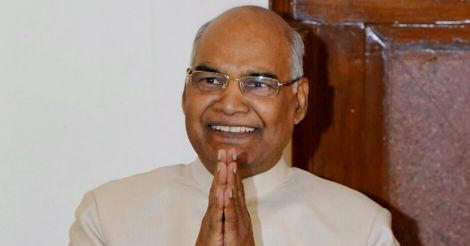 New Delhi: Ram Nath Kovind was Tuesday sworn in as India's 14th president, the first BJP leader and the second dalit in the Rashtrapati Bhavan.

Kovind was administered the oath of office to "preserve, protect and defend the constitution and law" by chief justice of India J.S. Kehar in an impressive ceremony in the Central Hall of Parliament.

12:27- “I come from a very simple background and the journey has been long,” says Kovind

Wondering where Pranab Mukherjee will stay after demitting office? Here's the answer

Finishing touches are being given to an iconic...

12:10 pm - The central hall filled with dignitaries including prime minister Narendra Modi rise to the tune of the National Anthem.

11:40 am - The outgoing president and president-elect are on their way to the Parliament.

11:25 am - A glimpse of the scheduled event. Kovind is expected to take oath at 12.15 pm at the central hall of the Parliament. He will later address members of the Parliament and the ceremony will conclude by 12.45 pm.

Kovind will then escort Mukherjee to his new residence at 10 Rajaji Marg.

10:44 am - Kovind's family members arrive at the Parliament ahead of the swearing in ceremony

After he took oath, Kovind was given a 21-gun salute to mark the assumption of office of the highest constitutional post in the country.

Once the oath taking was over, Kovind and Mukherjee exchanged seats on the dais after which the new president delivered his maiden speech as president.

Kovind was elected with 65 percent of votes defeating Meira Kumar to occupy the top post.

The 71-year-old leader born in Kanpur, Uttar Pradesh, had also earned the support of the JD(U), which broke ranks with the "mahagathbandhan" because of his non-confrontational approach as governor of the state.

A commerce graduate, Kovind studied law at the Kanpur University, practiced in the Delhi High Court and the Supreme Court. He was also the central government's standing counsel in the apex court from 1980-93.

Elected to the Rajya Sabha in April 1994 from Uttar Pradesh, he served two consecutive terms till March 2006.

Outgoing Mukherjee bows out of public life after a five- decade political career.

The vice-presidential election will be held on August 5. While BJP has nominated a former party president, Venkaiah Naidu, the opposition has fielded former West Bengal governor Gopal Krishna Gandhi.