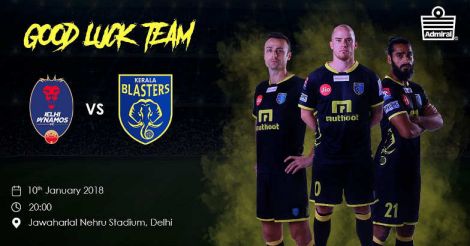 Hopefully, the new away kit will bring in a change in Blasters' fortunes and put them back on the victory path. Twitter

One thing that has been synonymous with Kerala Blasters is their yellow jersey. But, Wednesday night will see Blasters wear black in their away match against Delhi Dynamos in ISL Season 4.

Hopefully, the new away kit will bring in a change in their fortunes and put them back on the victory path. The Yellow Brigade have just eight points from as many games and are lying eighth in the 10-team competition. They have managed to win just one game this season.

Blasters parted ways with their Dutch coach Rene Meulensteen after suffering a 1-3 loss to Bengaluru FC in Kochi on New Year's Eve. The team under new boss David James rallied to hold FC Pune City 1-1 in its last encounter.

The game against Delhi is the first of Blasters' three away matches in the space of one week. Sachin Tendulkar co-owned side takes on Mumbai City FC on Sunday before running into Jamshedpur FC on January 17.