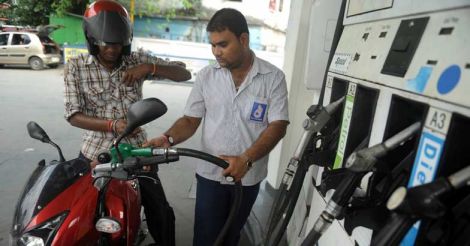 Opposition leaders criticised the government for the increases, which have come days after a crucial election in the state of Karnataka that both the ruling party and opposition Congress party have fought hard to win.

Fuel prices had been kept steady for nearly three weeks despite a move to market-linked pricing years ago.

State-owned Indian Oil Corp (IOC), whose price decision is followed by other refiners, said last week that it was keeping rates constant because the "current global oil price rise is not supported by fundamentals."

It was not immediately clear what prompted the company to raise prices on Monday. A company spokesman could not be reached for comment.

"The retailers may have been asked to absorb the incremental hikes as we had seen during Gujarat state elections (in December)," said Senthil Kumaran, senior oil analyst at energy consultancy FGE.

An oil ministry spokesman did not respond immediately to a request for comment.

Petrol prices have risen by about 0.2 percent and diesel prices by 0.3 percent in major Indian cities this week, according to data provided by IOC.

"This government is blatantly lying to the people by telling them that prices are controlled by market mechanisms," said Abhishek Singhvi, a spokesman for the Congress party.

Global crude oil prices this month hit their highest in more than three years on record Asian demand and after the United States said it would re-impose sanctions on major oil exporter Iran, which is an important supplier to India.