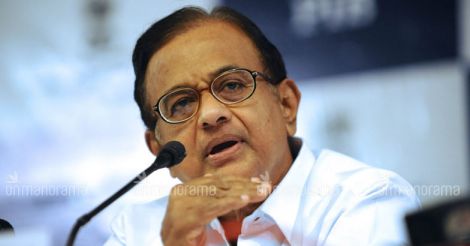 New Delhi: The Congress has launched a fusillade against Karnataka governor Vajubhai Vala after he invited the BJP to form the government in the state, dubbing him a stooge of the NDA major and accusing him of encountering Constitution at the behest of prime Minister Narendra Modi and BJP chief Amit Shah.

Congress leader P Chidambaram alleged that the governor has given Yeddyurappa 15 days' time to 'convert' the number of 104 legislators to 111.

The BJP has 104 MLAs, that is, nine short of simple majority. The Congress-JD(S) combine on the other hand has claimed to have adequate numbers and had requested the governor to allow the coalition to form the government in the southern state.

Vala on Tuesday invited BJP legislature party leader B S Yeddyurappa to form the government in Karnataka, capping a day of intense jockeying for power and allegations by the Congress of bribery and horse-trading against the BJP and Modi.

Vala also asked Yeddyurappa to seek a vote of confidence within 15 days of assuming office as the chief minister.

Congress' chief spokesperson Randeep Singh Surjewala said that the Karnataka governor was acting as a stooge of the BJP. He has ashamed the office of the governor by inviting the BJP to form government and allow its leader B S Yeddyurappa to take oath as chief minister,

He questioned Vala's decision to invite the BJP, which he alleged did not have requisite numbers to form the government.

The governor has encountered Constitution at the behest of Modi and Shah calling an 'immoral and illegal' government to be sworn-in as the 'illegitimate child' cannot sustain the scrutiny of Constitution and test of law, the Congress leader said.

Surjewala hit out at Vala also on Twitter, accusing him of denigrating the Governor's office, trampling upon Constitution and abusing law and acting like a "BJP puppet".

Vala, Surjewala charged, chose to serve "his masters in the BJP" than serving the Constitution.

"Vajubhai Vala denigrates the Governor's office, tramples upon Constitution, abuses the law & acts as a BJP puppet. He chooses to serve his Master's in BJP rather then serve the Constitution. As @BJPKarnataka informed in advance, orders come from BJP HQ than the sanctity of office," he said on Twitter.

Party general secretary Ashok Gehlot said the decision was a "murder of democracy" and has been taken "under pressure from the BJP leadership".

"It is a murder of democracy in the country and it is a black day in India's history...The decision has been taken under pressure of BJP leaders," Gehlot told PTI.

Gehlot expressed concerns over the development and said people of the country are "worried" over the direction in which the country was moving.