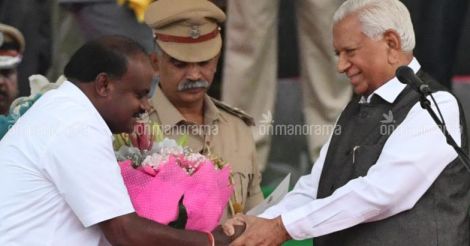 Bengaluru: H D Kumaraswamy was on Wednesday sworn in as the Karnataka chief minister at the head of a JD (S)-Congress coalition government.

He was administered the oath of office and secrecy by governor Vajubhai Vala at a grand ceremony in the Vidhana Soudha complex, the seat of power in Bengaluru.

Other members of the council of ministers will be inducted after the Kumaraswamy government wins the trust vote on Friday.

Attired in the traditional "dhoti" and white shirt, Kumaraswamy took the oath in the name of God and the people of "Kannada Nadu".

The BJP boycotted the ceremony and observed a "Black Day" during which it held statewide protests against the new coalition government, which it called "unholy".

Karnataka assembly convened on May 25 for floor test

The Karnataka Legislative Assemblyis scheduled to meet on May 25 for the floor test of the newlyformed Congress-JD(S) coalition government headed by Chief Minister H D Kumaraswamy.

The adjourned meeting of the first session of the newly constituted 15th assembly has been convened to meet at 12.15 pm, an intimation sent to the MLAs read.

Official sources said the election of the speaker and deputy speaker besides the floor test is scheduled to take place the same day.