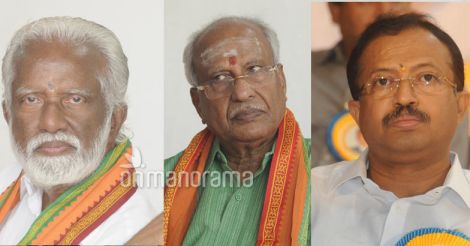 State president Kummanam Rajasekharan, in his reply to the criticism, blurted out and warned against placing the onus squarely on him for the defeat.

It was the statements of Sree Narayana Dharma Paripalana (SNDP) Yogam general secretary Vellapally Natesan that rendered a severe blow to the party, he said.

The state leadership committed serious in failing to conduct a thorough study about the constituency. State leaders were not given the charge for managing the campaign. The state leadership also tried to impress upon the national leadership that the candidate would secure about 1.25 lakh votes and it may even touch 2 lakh.

It was also felt that the state president made a unilateral decision on the candidate. Had the party fielded a strong state leader, it could have improved its performance. Criticism was also raised against the state leaders designated for running the campaign. One of them stayed in a hotel owned by a controversial businessman from Palakkad, it was alleged.

O. Rajagopal, MLA, general secretary Sobha Surendran, party scheduled caste Morcha president B. Sudheer and secretary V.K. Sajeevan were those who came out strongly against the State leadership by naming its lapses.

The statements of Vellapally Natesan gave room for a a confusion and this led to a drift to the Left Democratic Front (LDF), Kummanam felt. He also pointed out there were no lapses and the candidate was familiar to the voters.

Rajagopal later told media persons that in a state where there was a strong sentiment against prime minister Narendra Modi, the voters exercised their franchise in favour of the United Democratic Front.

Victory for the UDF in Malappuram was not unexpected. The BJP never hoped of securing an impressive win in the constituency, he said.

The state executive will meet on Wednesday. Preparations for the 2019 Lok Sabha elections is the main agenda of the meeting. Details of the deliberations at the national executive that concluded in Odisha three days back, would also be reported at the executive meeting.