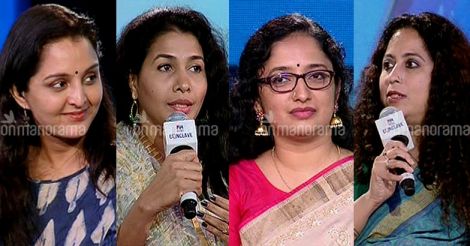 The all-woman session of the Manorama News Conclave tried to tug on this thought line that only a woman could decipher.

Opening the session with an apology on donning a robe that she is not used to, actor Manju Warrier said the definitions of happiness were different for men and women.

Author Anita Nair said the 'othukkam' or modesty that was being religiously preached by our society was the product of a male scrutiny. This scrutiny defined what a woman did, throughout their life, she said.

Civil servant Divya Iyer said the women of Kerala were not behind anyone in self-confidence and their real test of skills was when they moved out to new terrains.

Drawing from her life experiences, Divya Iyer said the women of rural Kerala were happier and more empowered than their urban counterparts. She said her grandmother was the strongest person she had come across.

Olympian Anju Bobby George said one had to leave their comfort zones to be an achiever.

Rounding off the session, Manju Warrier said women alone should be the judge of their happiness.