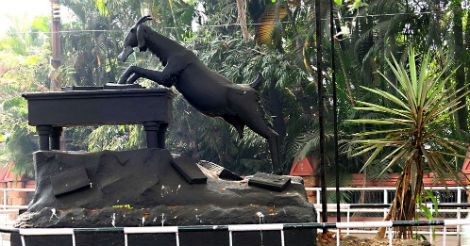 A decade-and-half or so ago, a dashing district collector posted in Kozhikode decided to beautify the famed town square of Mananchira.

The scenic 'but neglected Chira,' a waterbody, was much part of the daily life of the Kozhikode citizen. The officer had drawn up a plan to break a road and send it winding round the 'Chira.' It was no easy task but the officer stood by the plan executed it. Now, the Mananchira and its environs are the pride of everyone in Kozhikode.

The typical exuberance of the NITI Aayog CEO apparently stems from this conviction and his ability to envision the future. At the Manorama News Conclave here on Saturday, he abandoned the podium and paced up an down the stage.

He urged Keralaites to abandon the 'typical and dogmatic' mindsets which impeded development, a call which was greeted with applause.

It was evident that the CEO meant business as he listed the top-rated and innovative start-ups he had come across.

He urged people not to drive their children into government jobs, thereby not allowing them to 'fail and learn.'

Stating the hard facts, he said Kerala would need to innovate to be happy. The new models of development hinged on being green and sustainable.

He said allowing and creating opportunities for people to walk, cycle, use metros and other clean modes of public transport could make us a happy society.

Amitabh Kant said his long stint in Kerala had helped him in his later years in the corridors of power in New Delhi.