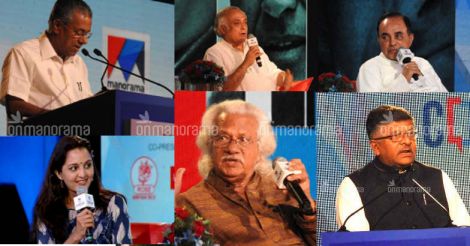 It was an exploration of a different sort. The happiness realm was analysed thread-bare - in Francis Bacon's terms it was a cymini sectore - meaning hair-splitting analysis.

The Manorama News Conclave used rich and varied prisms to refract and gauge the various colors of happiness.

The stupefying sets of Baahubali, the sense of proportion needed while acquiring wealth, the connect and credibility of political leaders, the scope of cinematic ambition, and the hurdles faced by the bureaucracy were only some of the staging points reached during the course of discussions that finally tried to draw up a road map to happiness.

Also read | Political leadership should have a connect with people: Ravi Shankar Prasad

The thematically planned sessions represented various schools of thought. The dichotomy, the divergence, and the rare unity of discourse made the sessions lively.

The consensus call was for bringing about systemic changes to improve the manner and methods in which people live. The speakers said this could be done through various new and corrective measures that could revitalize the channels of growth and prosperity.

We need tag of a graft-free state, not low-corruption one: Pinarayi

Calling upon the people and the leadership to be unified in its course and action in sustaining the growth momentum attained in the past years, the conclave concluded by creating an environment for happiness-inducing thought and philosophy.