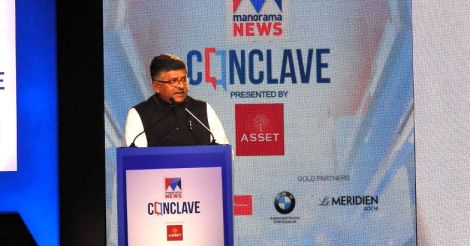 Kochi: The framework of governance must have the capacity to be transform, Union minister for IT and Law Ravi Shankar Prasad has said.

Delivering the valedictory address at the Manorama News Conclave in Kochi on Saturday, he said credible political leadership should be characterized by a connect with people.

Today, every ordinary Indian knows the power of his vote and can bring down the most powerful of leaders, he said adding that democracy was a great leveler. A politics bereft of honest and ethics would not survive, he said.

On a lighter note, the minister said the state of Kerala, which got the first elected Communist government in the world, should not restrict his party's ideology from entering the state.

He said Kerala was yet to get a 'truly national leader.'

In a veiled attack on Shashi Tharoor, he said a national leader was not one who could articulate his ideas well but one who had credibility.

Urging the state to welcome new ideas, he said digital India was the way ahead as it was all-inclusive.

Rating the elimination of middlemen and the recognition of merit as the biggest achievements of the government, he said the PM Nardendra Modi's popularity was surging.